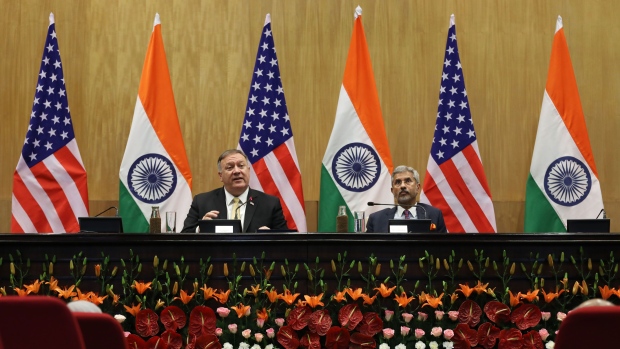 (Bloomberg) -- Secretary of State Michael Pompeo and his Indian counterpart stressed the strength of their two countries’ ties after a morning of meetings but reported little progress in resolving disputes over trade, defense and energy that have weighed on the partnership.

“Harmonizing our interests and our views, that’s really the task of diplomacy and I think secretary Pompeo would agree with me today that we have earned our pay,” External Affairs Minister Subrahmanyam Jaishankar said at a briefing alongside the top U.S. diplomat in New Delhi Wednesday. He said a key part of having a strategic relationship “is to comprehend the other nation’s interest.”

That was a reference to India’s continued desire to buy the Russian-made S-400 missile defense system, a move that could trigger U.S. sanctions. New Delhi also grudgingly stopped importing oil from Iran in response to Washington’s demands in May, and slapped tariffs on nearly 30 American products in response to higher duties imposed by the U.S. and President Donald Trump’s move June 1 to end trade concessions on $6.3 billion of Indian goods.

Pompeo’s visit, which included a meeting with Prime Minister Narendra Modi earlier Wednesday, wasn’t intended to seal final agreements on the issues faced by India and the U.S., whose trade has grown close to $90 billion annually.

The trade dispute in particular has been waged outside the State Department, and is part of a broader push by Trump to correct what he says are decades of unfair trade deals that have disadvantaged the U.S.

“We said we’d do our best to make sure that all the right people get in all the right places and work through these problem sets so that we can get out of this and get on with the business of growing each of our two economies,” Pompeo said.

A key for India has been ensuring reliable imports of oil now that it’s acquiesced to U.S. demands as part of a bid to choke off Iran’s economy and force it to negotiate a new deal to constrain its nuclear program.

Jaishankar said he had “underlined the importance of stability, predictability and affordability in terms of energy imports.” India currently imports about 85% of its oil needs.

“That’s a concern to which Secretary Pompeo was certainly very very receptive, Jaishankar said. “I think looking at his face, he certainly gets what our interests are.”

To contact the reporters on this story: Nick Wadhams in Washington at nwadhams@bloomberg.net;Bibhudatta Pradhan in New Delhi at bpradhan@bloomberg.net

To contact the editors responsible for this story: Bill Faries at wfaries@bloomberg.net, Karthikeyan Sundaram, Ruth Pollard