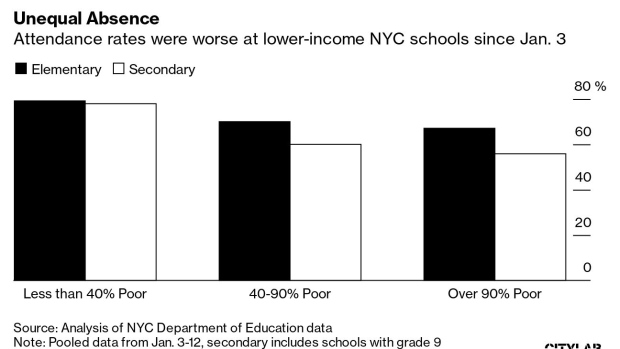 Eric Adams, mayor of New York, left, greets students returning from winter recess at a public elementary school in the Bronx borough of New York, U.S., on Monday, Jan. 3, 2022. Adams urged parents to "put your children in school" when the U.S.'s largest school system reopens on Monday, despite a third of Covid-19 tests coming back positive across the city and no requirement to test before attending classes. , Bloomberg

(Bloomberg) -- Fewer children in New York City’s low-income schools are attending classes during the most recent Covid surge than those in richer schools.

Nearly five in ten students were absent from high schools with the highest levels of poverty since school returned from winter break on Jan 3., double the rate of richer schools, where low-income students make up fewer than 40% of the classroom, according to an analysis of city data by Princeton University sociology and public affairs professor Jennifer Jennings. Districts in Harlem, the Lower East Side and the West Bronx in Manhattan were among those with the lowest median attendance.

The skewed absence rates risk widening a learning gap disproportionately harming students of color during the pandemic. The data also run counter to the rationale promulgated by New York City Mayor Eric Adams, who has defended his push for open school buildings by arguing the benefits of in-person instruction go beyond learning for low-income students who may also rely on school for warm meals and a safe place to go.

“A large fraction of kids in the most disadvantaged schools are not in school at present,” said Jennings, who pointed to potential drivers like higher case rates in low-income neighborhoods, as well as more multi-generational households that can spur safety concerns. “Families are dependent on resources that come through schools, especially food, but it’s quite clear that there are other ways to do this.”

Roughly 250,000 to 300,000 kids in the U.S.’s largest school system have stayed out of school over the last few weeks as citywide attendance dropped to 70% after the winter break. The school year attendance average is 88%, according to city data.

“This data reflects the socioeconomic inequities that have long existed in our City and have been exacerbated by the pandemic; a painful truth that underscores the importance of removing any barriers standing in the way of student participation,” said Department of Education spokesperson Sarah Casasnovas. “Our goal is to have every child attend school every day, which is why Mayor Adams and Chancellor Banks have kept our schools open and have seen increasing attendance across the City since schools returned from break.”

Casasnovas said the city is also “exploring” a remote option for students who need an alternative to in-person learning.

The attendance differential pre-dated Covid. Students from neighborhoods with high poverty levels had chronic absentee rates about 15 percentage points higher than peers in neighborhoods with low to moderate poverty in 2018, according to a New York University study.

But teachers say the latest omicron-fueled surge has hit harder. “When you only have 70% of students coming in, to me that’s failure,”  said Jake Jacobs, a middle school art teacher in the Bronx. “Parents have been staying away.”

To that end, Adams said he would now consider a temporary remote option for the city’s public schools, a stark reversal of his position to keep kids learning in person amid the Covid spike. “We are now speaking with the UFT on different methods on how we can make sure our children are educated in a very safe environment,” he said on Friday, referencing negotiations on implementing a remote option with the United Federation of Teachers, the city’s teachers union.