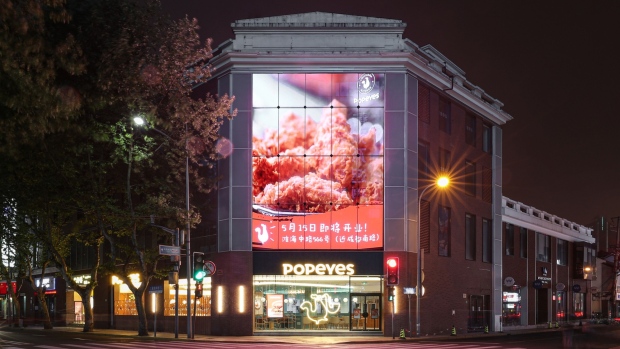 The coronavirus pandemic isn’t slowing Popeyes’ expansion plans in China, even after the deadly pathogen caused a record collapse in the country’s restaurant sector.

China will become the fast-food chain’s second-largest market in two-to-three years, Raphael Coelho, chief executive officer of Popeyes China, said in an interview Tuesday. Popeyes Louisiana Kitchen Inc., a unit of Restaurant Brands International Inc., which also owns the Burger King and Tim Hortons chains, is sticking to its plan to open 1,500 outlets in the next 10 years.

Popeyes is trying to bring its signature Buttermilk Chicken Sandwich into the Chinese market during one of the most perilous times for restaurants. The sector suffered a record collapse in the March quarter, with a 44 per cent sales plunge from a year ago as the economy ground to a halt. E-commerce sales rose 5.9 per cent as consumers were forced to eat at home.

The opening of Popeyes’ first store in Shanghai was pushed back to this week from the end March as the virus outbreak caused social restrictions and lockdowns. But Coelho said the company is seeing a rebound in the world’s biggest consumer market that gives it confidence to keep the aggressive expansion plan.

“We do witness a V-shaped recovery on a daily basis. Every day, every week, things are slightly better,” said Coelho. “As of now, we have 50,000 pre-registered customers who redeemed coupons from the Wechat account. If five per cent of these people show up on the opening day, the line will be quite big.”

Still, the restaurant industry is far from where it was before the coronavirus struck. Even with the lifting of lockdowns, the return of business has been slow as consumer habits change, with many still wary of public gatherings. Many medium and small-sized businesses have shut down while bigger chains are asking for rent cuts.

Restaurant Brands is forging ahead in this difficult environment with fast expansion plans for all its restaurants in China. Coffee and doughnut chain Tim Hortons, which entered China in 2019, has received an investment from internet giant Tencent Holdings Ltd. to support its plan to open 1,500 outlets from roughly 50 now, according to a statement Tuesday. Burger King, which has more than 1,300 stores in China, expects to open at least another 1,500 stores in 10 years, said Korhan Kurdoglu, CEO of TAB Food Investments, the operator of Popeyes and Burger King in China and Turkey.

“The market is gradually coming back to normalization,” said Kurdoglu. “We are seeing the light in the tunnel, and in two, three months we have the potential to come back to normal.”

The company also faces stiff competition from other big-name chains. Yum China Holdings Inc., operator of KFC and Pizza Hut, and McDonald’s Corp. have aggressive expansion plans. At the same time, Chinese consumers have been shifting their preference to healthier options.

But Popeyes, the new comer to the market, remains confident it can capture decent returns amid all uncertainties.

“I think you can’t get a more competitive market in fast food than in the U.S., but Popeyes is recognized and loved, with a loyal customer base,” said Coelho. “We are confident that in China we can replicate the same thing.”

--With assistance from Charlie Zhu.