Over the past two years Canada’s productivity hasn’t grown at all. And while the latest data due this week is poised to show a pick-up, it’s likely not sustainable, according to Bank of Montreal Chief Economist Doug Porter.

“When you look at Canada’s overall growth rate it’s basically just keeping pace with population growth and not much else,” Porter said, citing meager business investment as a major factor for sluggish economic efficiency.

Statistics Canada will release third quarter productivity figures Wednesday at 8:30 a.m. in Ottawa. Growth is estimated at 0.2% on the quarter, according to a median forecast in a Bloomberg survey of economists. Through the second quarter, it was hovering barely above year-ago levels and has been little changed from what it was two years ago. 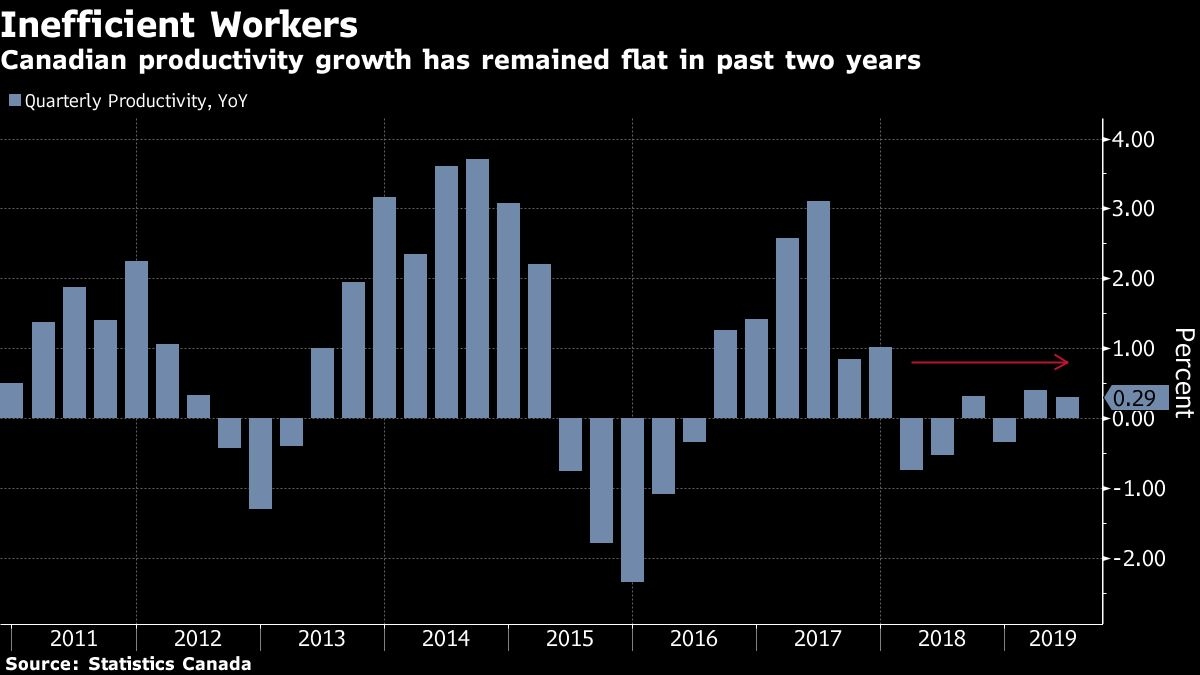 Even though productivity hasn’t contributed much to growth, the Canadian economy continues to expand by adding more workers. The number of people in Canada rose 1.4% in July from a year earlier, the fastest pace of population growth since 1990. The nation has added more than 560,000 people to the labor force over the past two years, an increase of almost 3%.

While an important contributor to growth, relying wholly on new entrants is not an ideal situation in the long term because without productivity gains, an economy won’t increase its standard of living and improve wages and profits.

One theory is that it’s because most of Canada’s job growth has been concentrated in the service sector, where productivity is difficult to measure. Additionally, Canada’s resource sector -- where productivity gains are typically high -- has been on the decline for years amid plunging oil prices and weak exports.

Another theory is that companies, burdened by the uncertainty around the new North American free trade agreement and global tension, have decided to forgo capital investments and instead hire workers who they can let go in case of a sudden downturn.

A third theory is that robots aren’t taking away jobs just yet. According to Canadian Imperial Bank of Commerce economist Royce Mendes, low productivity levels may indicate that companies are struggling to automate on a widespread scale.

“The productivity case is a bit of a puzzle in so far that we think that we are seeing all this technological growth,” Mendes said. “Is it really being utilized in the economy to its full extent? Maybe not just yet.”

That theory aligns with the view laid out by Bank of Canada Governor Stephen Poloz in a paper on technological revolutions last month.

Despite productivity growth remaining low, the robust labor force is reassuring at least one economist on Canada’s prospects. “If being unproductive means that you’re on full employment and wages growing at four per cent a year, then I’m happy to be so unproductive versus other countries,” said National Bank of Canada Chief Economist Stefane Marion.