Canada’s population growth is returning closer to its pre-pandemic pace after coming to a near halt last year.

The nation’s population rose by 0.2 per cent, or 82,366 people, in the first three months of this year to 38.1 million, according to quarterly estimates released Thursday by Statistics Canada. That’s the fastest quarterly population growth since the pandemic hit, and reflects a rebound in international migration. Quarterly growth averaged just under 0.3 per cent in the decade before the pandemic.

The numbers suggest the nation is finding ways to allow workers and students to enter the country despite travel restrictions. Immigration into Canada has been a key driver of of economic growth, having an impact on everything from the housing market to banking services. 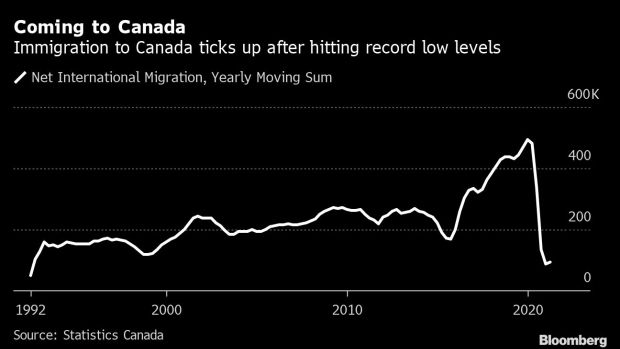 Prime Minister Justin Trudeau has prioritized immigration despite the economic downturn, seeing it as necessary to counter the impact of aging demographics on the labor force. This year, the government is targeting 401,000 permanent residents to make up for missing its 2020 goal, hoping to put more non-Canadians already living in the country on the path to citizenship.

Net international migration -- which also includes non-permanent residents like students -- was the biggest contributor to population growth in the first quarter, with 75,987 new entrants. That’s been about the recent average for the first three months of a year.

“We’re starting to see a strong rebound of study permit visas,” Andrew Agopsowicz, an economist at Royal Bank of Canada, said by email.

That pace also appears to have continued into the second quarter, according to the latest data from Immigration Canada that show the country accepted 91,580 permanent residents in the first four months of 2021.

In 2020, population growth fell to its slowest since World War I as the country halted nearly all travel to curb the spread of COVID-19. But the government has adjusted its immigration and travel guidelines to ensure that newcomers including students and close relatives can enter. Canada has had its border closed to non-essential travel for nearly 15 months.

From a year ago, population is up just 0.4 per cent. That’s unchanged from the year-over-year pace at end of last year that is the weakest in data going back to the 1940s.

The country’s natural increase, or births minus deaths, remained historically low in the first quarter, with a gain of only 6,379. That’s the smallest amount in records dating back to 1946 and reflects aging demographics and low fertility rates, something that other developed countries are struggling with.