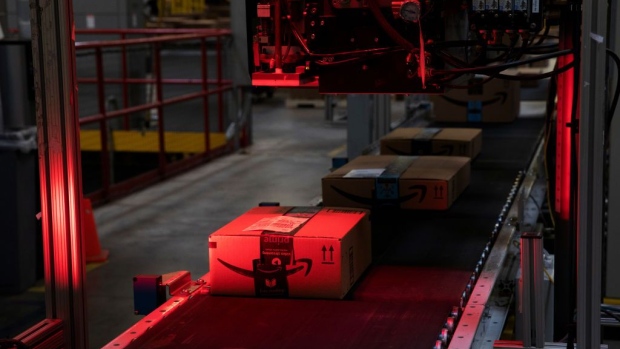 (Bloomberg) -- Amazon’s Prime Day gives shoppers an opportunity to flex their deal-spotting muscles ahead of Black Friday. It also gives package thieves their own chance to warm up.

It’s hard to pin down exactly how many cardboard boxes are pilfered from plain sight around the invented summer buying spree, since customers can report thefts to one of three sources—the local police department, the retailer or the mail carrier—and those reports aren’t tallied centrally. But according to research from video-doorbell company Ring, 19% of U.S. households had a package stolen at some point in 2017 with an average value of $140 per package. Nextdoor, a social-networking app for neighborhoods, says user comments about package theft spiked 85% between July 18 and 20 last year, the main delivery period for Prime Day packages.

“Criminals know about Prime Day—everyone has access to the internet these days,” said James Crecco, a police captain in Jersey City, New Jersey.

The police department in Jersey City partnered with Amazon in December to run a sting operation and track down package thieves after hearing from a swelling number of victims of porch piracy. Within just seven minutes of placing the first package, officers made an arrest and ultimately caught 23 robbers over an 11-day period. The department has been thinking about implementing a similar plan in the days following Prime Day, though Crecco said it was waiting to see if Amazon would partner again before renewing the program.

Of course, on-the-porch delivery isn’t a new phenomenon in the U.S., with Montgomery Ward launching its dry goods mail-order business while Ulysses S. Grant was president and Sears, Roebuck and Co.’s iconic catalog serving as America’s consumer bible for a century. But the proliferation of e-commerce brought delivery of goods—and chances to pilfer them—to a whole new level.

E-commerce accounted for more than 10% of all retail and food service sales in the first quarter, up from about 3% in 1999, according to the Commerce Department. Orders come in all year long, especially as grocery delivery expands, but they’re concentrated around big shopping events. During last year’s Prime Day, members bought more than 100 million products. Amazon has expanded this year’s extravaganza to 48 hours from 36 last year, with Coresight Research forecasting Amazon raking in $5.8 billion globally in sales, up from an estimated $3.9 billion in 2018.

“Criminals know about Prime Day—everyone has access to the internet these days.”

And that’s just the orders placed on Amazon itself. With rivals from Target Corp. to one-time mail-order king Sears itself leaning into the event, logistics providers will be extra busy in the coming days.

The growth of porch piracy has led a number of states, including California, South Carolina, Michigan and New Jersey, to propose bills for stricter penalties for package thieves. In Texas, the problem became so prevalent that state representatives formed a mail theft task force in 2017 and have since passed legislation that makes certain degrees of package theft a felony.

When packages do go missing, most major mail carriers agree to be liable for about $100, leaving the retailer to refund the remaining dollar amount or send a new item. Accenture finds that 70% of consumers won’t return to an online store after a bad delivery experience, which has retailers putting more pressure on logistics companies to give customers what they want, including tracking and delivery flexibility to ensure their wares arrive unscathed.

When online shopping first became popular, the “focus was on price, then it became on free shipping, then fast shipping and now consumer-controlled shipping that can be altered until 10 minutes before the package arrives,” Accenture’s Buhler said. The demand for control over delivery comes from concerns about theft combined with increased demand for convenience, he said.

Theft's a pervasive problem, and retailers have tried a variety of deterrents but are still looking for the perfect solution. For instance, to attract grocery customers, Walmart Inc. is experimenting with staffers, sporting wearable cameras, arriving in company-owned cars to unpack food in customers’ kitchens. Others are trying to leave deliveries in shoppers’ garages or the trunks of their cars. But with each new test, questions linger about privacy and efficiency, plus one-off issues like escaping pets or malfunctioning apps that deny the employee entry.

Amazon itself offers Amazon Lockers, keyless entry and click-and-collect “counters” to give buyers more ways to control how they receive their orders. Amazon Logistics also gives Prime members the opportunity to track the arrival of their packages in real time and to receive a photo of where the box was dropped, the company said. A spokeswoman declined to comment further or share company data on thefts.

Rising fear about package theft has helped usher in a new industry altogether: porch security. Brad Ruffkess, a former Coca-Cola Co. employee, installed security cameras at his Atlanta home and watched two boxes get stolen off of his doorstep within weeks of each other in 2017. Frustrated by the limited protection options available, Ruffkess founded BoxLock Inc., a WiFi-connected lock that lets delivery drivers place packages in secure parcel boxes outside users’ homes.

BoxLock launched on Prime Day last year and sold out within hours of being posted to the Amazon website, he said. Other innovations that seek to keep porch pirates from their loot include secure parcel mailboxes, in-home package drops, Nest and Ring cameras, and alternative delivery locations through programs like UPS My Choice.

“There’s still a lot more innovation to come in package security as e-commerce continues to grow,” Buhler said. “When it gets up to 20% of total shopping and there are so many more packages on people’s doorsteps, we’ll see even more innovation in protecting deliveries.”

Back in Jersey City, a booming waterfront metropolis just over the Hudson River from Manhattan, package theft is evenly distributed among high and lower-income neighborhoods, Captain Crecco said, calling it one of the “rare crimes that crosses every economic demographic.” The trick to stopping it is making sure it’s not so simple to pull off for minor criminals looking for a low-effort pull. “It’s easy and criminals aren’t looking for a lot of work,” he said.

To contact the author of this story: Olivia Rockeman in New York at orockeman1@bloomberg.net

To contact the editor responsible for this story: Anne Riley Moffat at ariley17@bloomberg.net, Lisa Wolfson