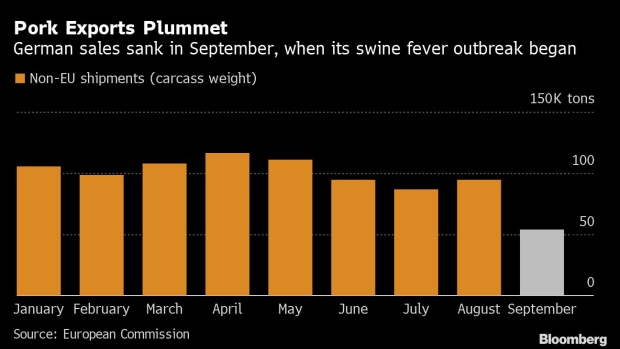 Virus-related processing slowdowns have left a backlog of hundreds of thousands of pigs on German farms. Photographer: Alex Kraus/Bloomberg , Bloomberg

(Bloomberg) -- There’s a glut of pork in Europe and prices are plunging.

Germany, the European Union’s leading producer, has been shut out of top markets across Asia since a deadly pig-virus outbreak started in wild boar in September. That’s leaving a surplus on the continent just as the latest raft of Covid-19 lockdowns means restaurants are hawking less schnitzel and sausage.

In Germany, pig prices have cratered more than 40% below March levels and carcass prices are at the lowest since 2016. While many European shippers are still benefiting from China’s record imports, plants in some other countries are also facing export restrictions. Virus-related processing slowdowns have also left a backlog of hundreds of thousands of pigs on German farms.

German farmers are losing about 60 euros ($71) per animal, and some may go out of business without emergency government aid, according to Germany’s pig farmers association.

Max Green, livestock analyst at IHS Markit, said that while China “is absorbing huge amounts” of pork, “it’s not enough to prop up prices.”

The EU is the world’s biggest pig shipper. Trade restrictions in Germany mean Danish farmers are selling fewer young animals across the border, where they’re often raised to slaughter weight. The country’s abattoirs are running on weekends and looking to hire new workers to keep up with the influx of hogs, according to Jais Valeur, chief executive officer of Danish Crown Group.

Rupert Claxton, meat director at consultant Gira, said it may take at least six months for supply and demand to resync. China has also directed importers to disinfect all imports of cold-chain products, adding complications to trade.

Sales could rebound once lockdowns lift and restaurants reopen. Demand for exports to Asia also remains strong, Valeur said. The U.S. Department of Agriculture forecasts EU pork consumption to climb 1.3% in 2021, after slumping to the lowest in at least two decades this year.

Pork demand will likely suffer less from Europe’s lockdowns than other foods like chicken or seafood, which rely more on restaurants and catering, said Justin Sherrard, animal-protein strategist at Rabobank. Still, prices could stay under pressure as sellers hunt for new export markets or look to boost retail demand.