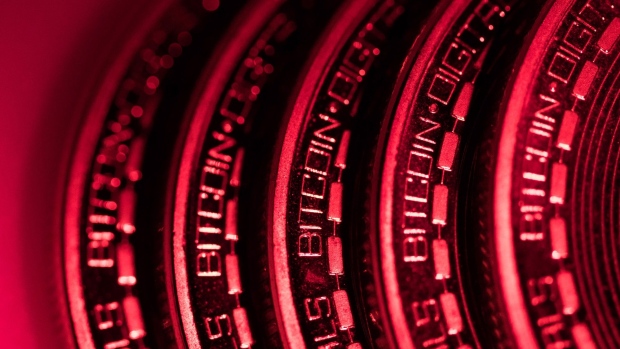 A pedestrian looks at monitors showing the prices of virtual currencies at the Bithumb exchange office in Seoul, South Korea, on Friday, Feb. 2, 2018. While prices for the cryptocurrency are falling on major exchanges around the world, nowhere have the declines been faster than in Asia's fourth-largest economy. , Bloomberg

Risk is running rampant in financial markets. Stocks trade at dot-come-era valuations, the IPO pipeline is full, SPACs are back, Bitcoin’s headed toward a record. And right on cue, here come the crypto opportunists.

Fueled by a spike in speculative appetite, cryptocurrency entrepreneurs are offering new digital coins at a torrid pace reminiscent of the Bitcoin boom three years ago. Among the freshly listed: Porkchop, Davecoin, Spaghetti, Newtonium and Whale. Many have no obvious utility, but investors have poured billions into them up in hopes of riding one to an easy profit.The world of crypto has always attracted peddlers of get-rich-quick products when fans of rewiring the global financial system start buying into a new idea. In 2017, it was Bitcoin and the end of fiat currency.

This time, buzz is growing over decentralized finance applications that seek to cut out institutions from things like lending. Back then, tax cuts had juiced the global stock market. Now, central banks are plowing trillions into the system, depressing bond yields and sparking a rush into alternative assets.

“I lived through and profited through the 2017 crypto bubble and this feels somewhat reminiscent to it,” said Michael Novogratz, founder and chief executive officer of Galaxy Investment Partners in New York. “It was the ICOs back then. A new ICO every day and the herd would swim to that ICO and jam the price up and there’d be a frenzy of liquidity and price and then it would collapse and they’d move on to the next thing. And it feels a little bit like that.”

More than 500 coins have been listed in the past month, according to CoinMarketCap.com. While exact figures for comparison are hard to come by, the boom hearkens back to when the blockchain frenzy saw iced tea makers, office-product resellers and even Kodak among those issuing thousands of coins with the promise of decentralized wealth. Those took in billions before a crackdown by regulators revealed almost all were nothing more than marketing proposals. There’s little reason to expect that investors will fare better this time.

Perhaps memories are short in the world of crypto, or maybe it’s a new generation of coin fans driving the latest surge in demand. Either way, it’s of a piece with the explosion of account openings at retail brokerages, where newbie traders piled into bankrupt companies and chased rallies in little-known stocks that barely have revenue. The same forces are at work in the world of speculative asset companies, where investors buy into a publicly traded shell that aims to find a private gem to acquire.

As is often the case, crypto proponents are promising this time is different. Many of the new coins are related to projects that have actually launched and are structured in a manner to avoid some of the regulatory hurdles that tripped up a lot of ICOs. And some apps for decentralized finance -- known as DeFi to the crypto crowd -- have shown some promise.

But coins like Porkchop and Davecoin don’t feel different from 2018. They have none of the DeFi veneer, essentially providing investors a way to gamble. Porkchop calls itself a game, in which total coin supply is reduced with each coin purchased, thus encouraging investors “it’ll pay to stay.”

Supporters of Davecoin, dubbed “a crypto awareness project,” get coins for certain tweets promoting it, with the promise of a windfall if the president or famous crypto investors such as the Winklevoss brothers retweet them. It recently jumped 50 per cent in 24 hours when stock trader Dave Portnoy, who inspired but isn’t affiliated with the coin, jumped into crypto before falling when he sold his holdings.

Thats the power of @mooniswap! 0,86% earnings only from the price slippages in the last 24h ($ETH-$SNX pool)! 💰🤑🙉#DeFi pic.twitter.com/hHX8CVh7oo

Other coins launched in recent months, like Compound, have become a favorite of speculators seeking triple-digit returns through strategies like yield-harvesting, in which users try to obtain as many tokens as possible and drive up the coins’ prices. Even among DeFi apps that work to let people dis-intermediate banks, coins are popping up as extra incentives.

“It sure appears as a speculative pump and dump,” said Mike McGlone, an analyst at Bloomberg Intelligence. “This to me is part of the problem for the broad crypto market advancement -- just too much supply, competition and ease of entry.”

The surge of coins seeking to cash in on DeFi’s rise has come to dwarf the movement itself.

While users have poured in more than US$7.75 billion into all DeFi applications, valuations of all related coins easily top that. Chainlink alone -- which makes a technology that serves data feeds like coin prices into DeFi apps -- has a coin with a market capitalization of nearly US$5.77 billion.

For veterans of the effort to upend the global financial market, the wild speculation is part of the natural way new markets develop and doesn’t diminish from the core view of how finance should be transacted.

These “are significant improvements over the last cycle’s model of raising an insane amount of money promising to decentralize everything and then failing to ship anything useful,” said Jack Purdy, an analyst at researcher Messari. “I don’t think this will end as badly.”

Still, some of the newly launched DeFi apps haven’t had their code audited, which leaves them vulnerable to losses through buggy code or hacks. Project Yam Finance amassed US$750 million recently -- then crashed within days, when a bug made it impossible for the app to function properly.

Many new DeFi tokens are listing on the dozens of new decentralized exchanges, where anyone can put a token up for free versus spending millions in fees at mainstream crypto exchanges. Instead of waiting for weeks to get approved, tokens can get listed on decentralized exchanges like Uniswap and Balancer much faster, and in some cases almost instantly.

“The ease of manipulation and the ability to pump and dump with little legal recourse makes the space ideal for rampant speculation,” McGlone said. And that means open season for Porkchop and Davecoin.