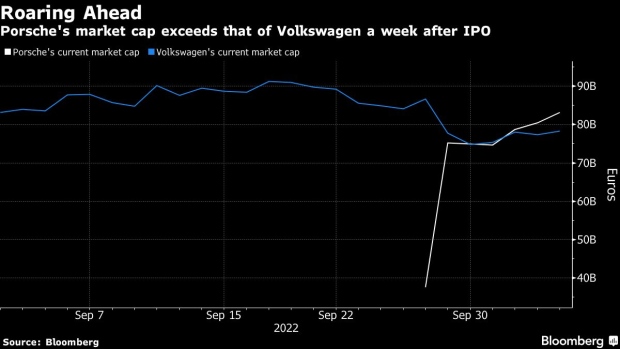 Europe’s largest carmaker by revenue last week raised 9.4 billion euros when Porsche, one of the group’s key profit contributors, returned to the stock market in what was the region’s biggest listing in a decade since miner Glencore Plc.

Porsche has bounced back this week after dipping below its IPO price on Monday amid broader market pressures and is now trading at about a 10% premium. The listing was priced at the top of the range amid high demand.

The debut of the 911 maker was a bold move into public markets, which have been largely shut to IPOs for most of the year, with companies shying away from seeking new listings because of the European energy crisis, rising interest rates and record inflation. For Volkswagen, the share sale is raising funds to plough into its electrification push, while investors get a slice of an emotional brand akin to Ferrari NV, which also managed a successful separation from parent Fiat in 2015.

Bank of America Corp., one of four global coordinators on Porsche’s IPO, propped up the stock in the post-listing days, purchasing shares from the date of the debut Sept. 29 through Oct. 4, the bank said in a statement late Wednesday.

Measures to stabilize Porsche’s share price were foreseen as part of the IPO process, and September inflation data, concerns about European energy supplies last week and a deteriorating geopolitical situation in Ukraine “made minor stabilization measures necessary,” Volkswagen said in a statement.