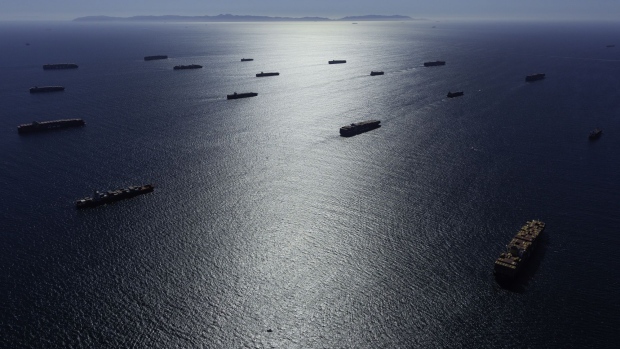 Container ships moored off the Los Angeles and Long Beach ports in Long Beach, California, U.S., on Saturday, Oct. 9, 2021. An unremitting shipping logjam in the waters outside of Los Angeles has already contributed to higher costs, delays and intermittent goods shortages across the U.S. Now, it could be to blame for California's biggest oil spill in 27 years. , Bloomberg

(Bloomberg) -- Commitments from shippers and cargo owners to move toward around-the-clock unloading at the docks in Los Angeles are a first step to addressing a national supply-chain backlog, White House Port Envoy John Porcari said.

Authorities have been taking other moves such as creating “pop-up” terminals inland from the ports and working with states to speed the awarding of commercial truck-driver licenses.

“We’ve secured large cargo owners,” Porcari said in an online briefing with reporters on Thursday. “That really helps the nation, it helps clear the docks. Now we need to energize the rest of the system.”

The Port of Los Angeles announced on Wednesday that it will start operating 24/7 to help ease congestion that’s led to a record number of cargo ships waiting to dock, in some cases for weeks. A shortage of truckers and other workers, lack of warehouse space and transportation bottlenecks are exacerbating the delays.

A surge of imports coming from Asia through the neighboring ports of Los Angeles and Long Beach has gummed up operations. Los Angeles reported that it handled 898,941 container units last month, a 1.7% increase from the same period last year and the best September in the port’s history.

The bay, which includes Long Beach, has 62 ships at anchor with 25 more on the way, Port of Los Angeles Executive Director Gene Seroka said during the briefing. Together, the southern California port complex is the biggest U.S. gateway for trade with Asia.

American retailers are warning the backlogs could cause shortages and higher prices during the Christmas shopping season.

President Joe Biden on Wednesday met with officials from the southern California ports, corporate executives and labor leaders to discuss ways to resolve the supply-chain snarls. As part of that effort, FedEx Corp., United Parcel Service Inc. and Walmart Inc. have pledged to move to 24/7 operations, while Target. Corp., Samsung Electronics Co. and Home Depot Inc. are increasing efforts to speed up distribution, according to the White House.