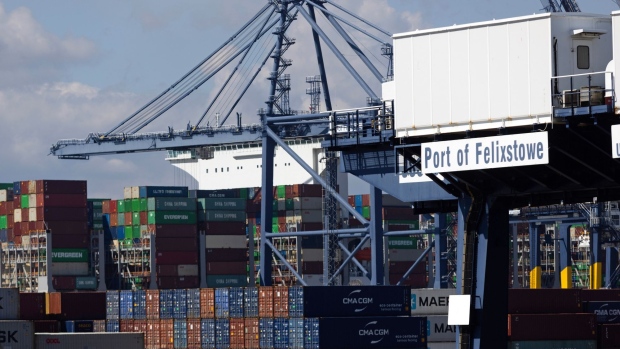 (Bloomberg) -- Dock workers at Felixstowe, Britain’s largest container port, rejected a pay deal imposed by management, paving the way for a new round of industrial action and disruption to vital trade flows.

Some 82% of votes cast in a ballot of Unite union members opposed a 7% raise and £500 bonus to be implemented by the UK arm of CK Hutchison Holdings Ltd., Bobby Morton, the labor group’s national officer, said by phone Monday.

Felixstowe, the main UK entry point for containerized goods produced in East Asia, was hit by eight days of walkouts involving almost 2,000 staff last month. Unite, which is pressing for a raise of at least 10% amid soaring inflation, said it expects to announce new strike dates Tuesday.

Felixstowe has said that its wage increase, detailed to staff in a letter, is worth 8.1% to 9.6% this year. A spokesman didn’t immediately respond to messages seeking further comment.

UK unions must give 14 days notice of action, so that the next strikes at Felixstowe could start from Sept. 27. That would mean they’d overlap with the second half of a two-week walkout by more than 500 Unite members at the Port of Liverpool, who are seeking an improved deal from Peel Ports Ltd.

Concurrent walkouts would see disruption to UK container traffic from North America, in which Liverpool specializes, at the same time as Asia. The strikes at the Irish Sea port are slated to begin next Tuesday, after being delayed by a day so as not to coincide with the funeral of Queen Elizabeth II.