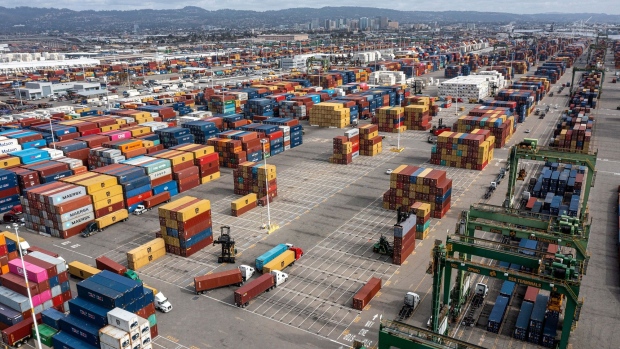 The Port of Oakland in Oakland, California, U.S., on Tuesday, Oct. 26, 2021. A supply-chain crunch that stretches from overseas manufacturers into American ports and retail stores threatens the American holiday shopping season. , Bloomberg

The 25-acre off-terminal yard at Oakland, the preferred export gateway for California’s agricultural exporters and for refrigerated proteins, “will provide access to equipment and provide faster truck turns without having to wait for in-terminal space,” the port said in an emailed statement Monday.

The surge in imports at the U.S.’s maritime hubs has clogged up ports, displacing ships and containers that are available to exporters, especially shipments of farm goods, the port said. It didn’t say when the new port would be operational.

The delays at southern California’s ports of Los Angeles and Long Beach -- the nation’s biggest sea gateway for trade -- have resulted in cargo ships bypassing Oakland and heading directly back to Asia to make up for lost time. That’s left agricultural exports on the docks and made them “collateral damage” in the supply-chain upheaval, according to Roger Isom, chief executive officer of the Western Agricultural Processors Association.

California grows more than one-third of the U.S.’s vegetables and two-thirds of its fruits and nuts, according to the state’s Department of Food and Agriculture. It exported $21.7 billion of agricultural goods in 2019, including almonds, pistachios, dairy and dairy products, wine and walnuts.