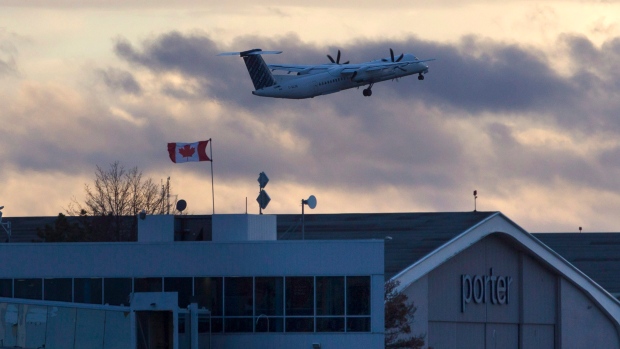 Porter Airlines' chief executive officer isn't giving up on his dream of adding CSeries planes to his fleet.

"That isn't currently on our radar screen, but if the opportunity comes up again to be able to operate something like the CS100 we'd [be interested]."

The regional carrier announced in early 2013 it had an agreement with Bombardier to buy as many as 30 of Bombardier's new jets; however, it was stymied in its bid to start flying the next-generation aircraft from its primary hub at Billy Bishop Toronto City Airport shortly after Justin Trudeau's Liberals swept to victory.

On November 12, 2015, Transport Minister Marc Garneau made it clear via Twitter the new federal government wouldn't consider extending the runway at the island airport in downtown Toronto, a prerequisite for flying CSeries jets.

As the new Minister of Transport, I have been enjoying learning about my files, including re: Toronto Island Airport" 1/2

I confirm that GoC position is same as LPC commitment: we will not re-open tripartite agreement for YTZ 2/2

But Deluce isn't giving up hope.

"I'm not suggesting [adding CSeries jets] is anything immediate," he said. "But I do think the aircraft is proving to be better than anyone ever envisioned -- and it was designed specifically for an urban airport like Billy Bishop."

There was a test case on the jet's urban performance this week when Swiss Airlines completed the first commercial flight destined for London's City Airport.

"This new milestone continues the momentum propelling the CSeries aircraft program," Bombardier Commercial Aircraft President Fred Cromer said in a statement Tuesday, alluding to an "increased level of interest" from other airlines that are eager to take advantage of the plane's suitability for urban environments.

The ultimate decision, however, is beyond Porter’s control. A so-called tripartite agreement requires the federal government, Toronto port authority and the city to sign off expanding Porter's fleet.

"At some point in time,” Deluce said, “the new technology and the desire on the part of passengers to extend out a bit further from a downtown airport may well cause those who approve of such matters to take another look at it. That would certainly be our desire."

Although there’s uncertainty about whether Porter will ultimately achieve that ambition, its CEO signaled his satisfaction with its performance, all things considered.

In a summer that’s seen no shortage of passenger horror stories – including Transat’s six-hour tarmac debacle in Ottawa – Porter hasn’t been immune to customer frustration. An internal document obtained by BNN shows Porter’s on-time performance in July was 56 per cent, compared to the carrier’s target of 88 per cent.

“Over the last 60 days, most airports in North America and definitely in the northeastern part of the United States and Canada have had some deterioration, in terms of on-time performance, and I think there’s a good number of reasons for that,” Deluce said, citing ground delays, airport construction and severe weather.

Deluce told BNN that in peak season, Porter’s planes are flying at 75 per cent, or more, of capacity. In comparison, load factors at larger rivals WestJet and Air Canada were 82.8 and 82.5 per cent, respectively, in the second quarter.

“If you’re a legacy carrier or one that operates larger aircraft, you need quite a bit higher load factors to even break even. In our case, we have a fairly low break-even point.”

Amid that relatively low hurdle to profitability, Porter hasn’t been able to shake the seemingly perennial speculation that it could be an attractive takeover target for WestJet as the Calgary-based airline aims to take market share from primary counterpart Air Canada.

Deluce, however, doubts WestJet will knock at his door.

“I think there’d probably be a better chance of us buying WestJet than them buying us, quite frankly,” he said.

“We have not been approached and I don’t anticipate that would happen.”