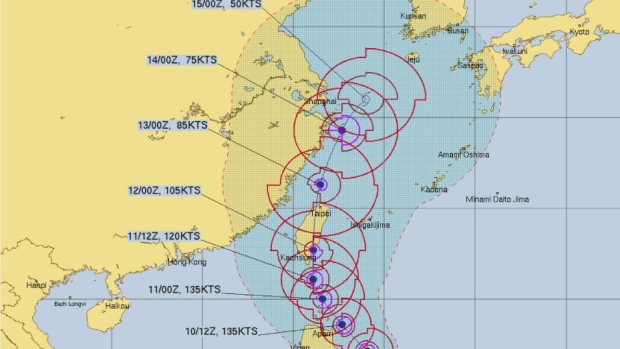 (Bloomberg) -- Two of China’s main ports are preparing for the arrival of Typhoon Chanthu, which was dumping heavy rain on the north of the Philippines Friday as it headed toward Taiwan and the Chinese coast.

Taiwan’s weather bureau issued a sea warning Friday for the area south of the island. However the port of Kaohsiung port is operating normally, a port spokesman said Friday afternoon when contacted by phone.

Ports in Asia have emerged as one of the bottlenecks for global trade, as European and U.S. demand for goods overwhelms the capacity of docks and ships. Covid has also affected the ability of shipping companies to operate smoothly, with crews being stricken and China closing two separate ports in recent months after outbreaks among dock workers.

Any shutdown due to weather, even a temporary one, would likely further slow supply chains which are already stretched as exporters attempt to ship more ahead of the holiday season.

While it’s no longer classed as a super typhoon, Chanthu remains formidable and is the equivalent of a category 4 hurricane, Accuweather said Thursday. It was north of the main Philippine island of Luzon and moving northwestward, according to the Philippine government weather bureau, with maximum winds of 130 knots (240 kilometers per hour) and gusts up to 160 knots, the U.S. Joint Typhoon Warning Center said.

While Chanthu didn’t hit land, the heavy rains increase the risk of flooding and landslides in some areas in the extreme north of Luzon island, and destructive winds will prevail in Cagayan province and Babuyan Islands which are under the third-highest storm signal in a five-step gauge, the weather bureau said.