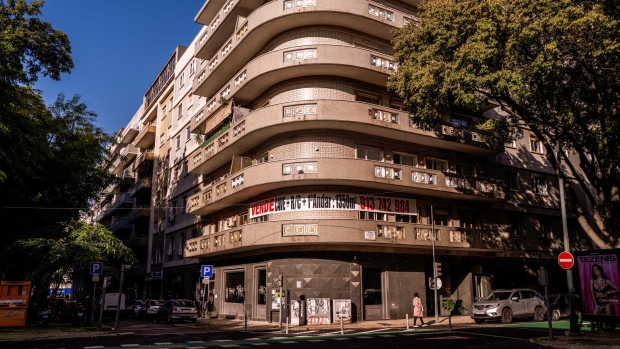 A sign advertising residential apartments for sale hangs on a housing block at Avenida Defensores de Chaves in Lisbon, Portugal, on Friday, Nov. 8, 2019. While Spain's debt has been seen as safer than neighboring Portugal's since the financial crisis, yields have recently climbed above those on their Mediterranean peer. Photographer: Jose Sarmento Matos/Bloomberg , Bloomberg

The number of home transactions in Portugal rose 58% in the second quarter from a year earlier to the highest since at least 2009 as the government eased restrictions that were put in place to face the pandemic.

The value of home transactions in the second quarter reached 8.6 billion euros ($10.1 billion), according to the National Statistics Institute. That’s also the highest since 2009, when the statistics institute, or INE, started collecting data on the housing market. Home prices rose 6.6% in the second quarter from a year earlier.

The increase in demand for homes is partly due to the fact that Portugal imposed “significant restrictions” to contain the pandemic in the second quarter of 2020, INE said in a statement on its website. The number of transactions in that quarter was the lowest since the third quarter of 2016.

Portugal has been easing restrictions as the country’s vaccination campaign advances. More than 80% of the country’s population has been fully vaccinated, one of the highest rates in the world.