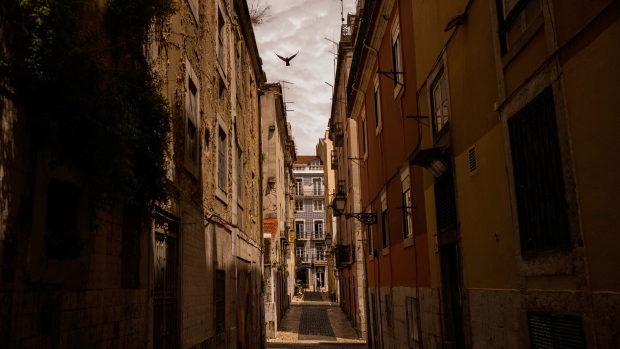 Residential buildings stand along a deserted street in the Bairro Alto neighbourhood in Lisbon, Portugal on Thursday, May 14, 2020. The European Union’s executive arm pushed for a continent-wide revival of tourism with a series of policy recommendations for EU countries as they loosen lockdowns triggered by the coronavirus pandemic. , Bloomberg

(Bloomberg) -- Portuguese house prices had the biggest annual rise in at least 12 years as a shortage of real estate available for sale helped to further bolster property values.

Home prices rose 13.2% from a year earlier in the second quarter, according to the country’s statistics institute. That’s the biggest increase since the institute started collecting data on the housing market in 2010. Prices rose 3.1% from the first quarter.

Property developers including Vanguard Properties, which has invested about 1 billion euros ($1 billion) in Portugal, have blamed rising real estate prices on a housing shortage that’s caused by long delays in the issuance of new building licenses, especially in the capital Lisbon.

The shortage of homes has coincided with rising demand from foreign buyers, who have flocked to Portugal in recent years in search of a warm climate and lower living costs. These buyers are willing to pay more than double for a Lisbon home than domestic buyers, the statistics institute said in a report in April.

Joana Almeida, a Lisbon councilwoman speaking at a real estate conference on Thursday, acknowledged the delays and said the city was working hard to speed up the licensing process in order to increase the supply of homes.

“We need time to show good results,” said Almeida, part of a team that’s only been in power for about a year.

Portugal’s government has excluded property purchases in Lisbon and the northern city of Oporto from its so-called golden visa program to try to regulate demand. The government has also imposed a 2% limit on rent increases next year as it tries to contain soaring living costs.