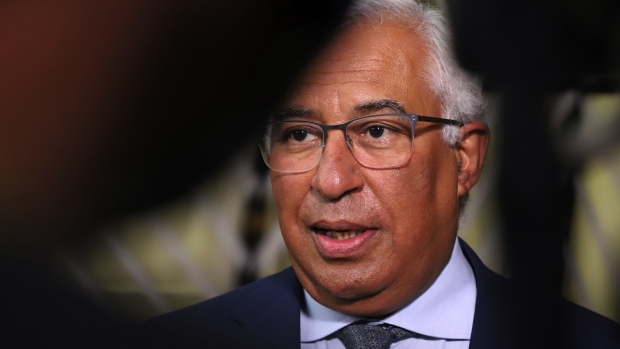 Antonio Costa, Portugal's prime minister, speaks to journalists as he arrives at a European Union (EU) leaders meeting in Brussels, Belgium, on Thursday, June 24, 2021. German Chancellor Angela Merkel called on the European Union to coordinate rules for travelers from areas with outbreaks of Covid-19 variants as the risk of a renewed spike in infections remains. , Bloomberg

Parties including the Left Bloc and the Communists joined other groups to oppose the budget proposal in an initial vote on Wednesday, said Eduardo Ferro Rodrigues, the assembly’s president.

President Marcelo Rebelo de Sousa has said that if the budget is rejected he’ll dissolve parliament, which would likely lead to early elections as soon as January. Costa, who is halfway through a second four-year term, has stated he won’t resign and said on Friday that if the president decides to call early elections he “will respect the decision and is ready for everything.”

A survey published by Jornal de Negocios on Sept. 27 indicated 37% support for the Socialists, 12 percentage points ahead of PSD, the center-right party that’s the biggest opposition group in parliament.“While the ruling Socialist Party is ahead in opinion polls, the potential implosion of the informal left-wing coalition that has governed Portugal since 2015 means another Socialist-led administration would not be a given in a scenario of early elections,” Antonio Barroso, deputy director of research at Teneo, said in a note on Tuesday.

The ruling Socialists hold 108 of parliament’s 230 seats and needed a simple majority to pass the plan. The Left Bloc party, which has 19 seats and had said earlier this week it remained available to negotiate with the government, voted against the 2022 budget together with the Communists. The Communists or the Left Bloc had helped the government’s budgets pass in parliament over the past six years by voting for the plans or abstaining.

PSD and other parties on the right also voted against the budget.

Portugal’s economy is recovering after shrinking 8.4% in 2020 as the coronavirus pandemic hurt the country’s tourism industry and other businesses, the biggest contraction since at least 1960. For Portugal, which has the third-highest debt ratio in the euro area behind Greece and Italy, tourism represents about 15% of the economy and 9% of employment.

The government aimed to narrow the budget deficit to 3.2% of gross domestic product in 2022 from an estimated 4.3% this year as growth accelerates, according to the budget proposal. It said in April that the European Union’s recovery plan will have an economic impact of 22 billion euros in Portugal through 2025.

Portugal’s 10-year bond yield was at 0.37% on Wednesday, little changed from six months ago.