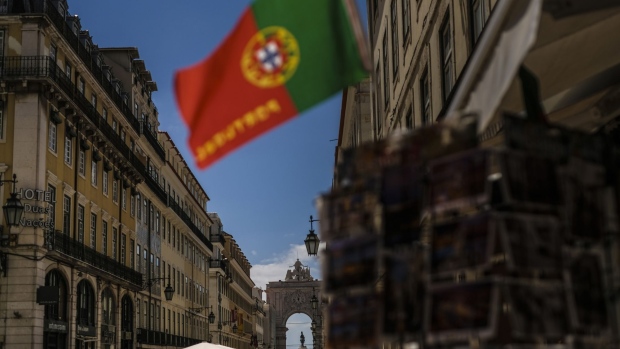 A Portuguese national flag hangs on display outside a tourist store near the Augusta street arch in the Baixa district in Lisbon, Portugal, on Monday, July 30, 2018. The revival in Lisbon’s downtown property market began after the previous government eased long-held rent controls in 2011 and started offering residence permits and tax breaks to foreigners. Photographer: Patricia De Melo Moreira/Bloomberg , Bloomberg

(Bloomberg) -- Portugal’s senior unsecured rating was raised to Baa2 from Baa3 and the outlook was changed to stable from positive by Moody’s Investors Service.

Moody’s raised the country’s rating on improved expectations in its longer-term growth prospects and confidence the debt burden will decline in coming years on stronger economic growth and fiscal policymaking, Moody’s said in the statement.The Portuguese economy is recovering after it shrank 7.6% in 2020 as the coronavirus pandemic hurt the country’s tourism industry and other businesses, the biggest contraction since at least 1960. For Portugal, which has the third-highest debt ratio in the euro area behind Greece and Italy, tourism represents about 15% of the economy.

The European Commission said in July that it forecasts the Portuguese economy will expand 3.9% in 2021.