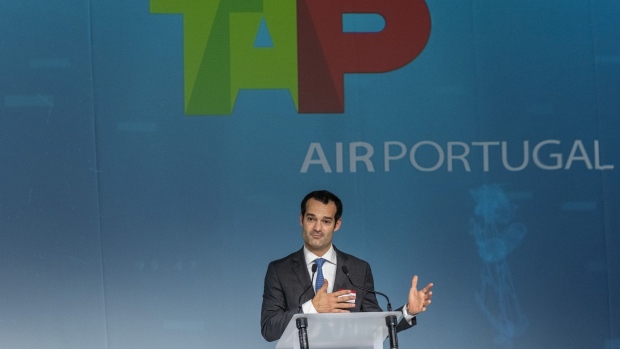 (Bloomberg) -- Portugal’s decision to oust the chief executive officer of TAP after a rescue of the nation’s leading airline has created an urgent vacancy to fill at a time when a broad overhaul is needed.

As the government agreed to boost its holding in loss-making TAP to 72.5% on July 2, it simultaneously ended the tenure of Antonoaldo Neves after more than 2 1/2 years at the helm.

“I think it’s impossible to find a new CEO for TAP in a shorter period because the search needs to go beyond Portugal,” said Neves de Almeida. “We’re talking about a company that needs to undergo a deep restructuring process.”

Infrastructure Minister Pedro Nuno Santos is putting in place an interim management team to run the carrier. With the final deal to increase the Portuguese government’s stake in TAP yet to be signed, it remains unclear if Neves still has a hand in the running of the company. A TAP spokesman declined to comment.

Faced with the prospect of TAP collapsing, Portugal agreed to buy airline enterpreneur David Neeleman’s stake, lifting its holding from 50% at the bleakest of moments to invest. TAP has gone from operating more than 2,000 flights a week to seeing most of its operations halted due to the outbreak.

Neves was installed in 2018, three years after a consortium led by Neeleman privatized the debt-laden, government-owned airline. The 45-year-old Neves, a former CEO of Neeleman’s Brazilian airline Azul SA, spearheaded TAP’s plans to renovate its fleet and added new destinations in the Americas.

Before the coronavirus pandemic brought global travel to a halt, Neves said in 2019 that he was preparing TAP for a possible initial public offering.

The relationship between Portuguese Prime Minister Antonio Costa’s government and TAP’s private shareholders hasn’t always been easy. Tensions between the two parties surfaced last year when the government said TAP’s executive leadership, which was picked by Neeleman’s Atlantic Gateway ownerhsip venture, failed to inform the board of a decision to award bonus payments to some workers after the airline posted a loss in 2018.

The airline’s first-quarter loss widened to 395 million euros from a loss of 107 million euros a year earlier as the number of passengers fell 13%. TAP’s net financial debt was 1.13 billion euros at the end of the first quarter.

One of the first major tasks for the incoming CEO will be to either reimburse state loans within six months or come up with a restructuring plan that ensure’s TAP’s “long-term viability,” European Union Competition Commissioner Margrethe Vestager said in June, after the European Commission approved Portugal’s 1.2 billion-euro ($1.4 billion) bailout.Like other airlines such as Deutsche Lufthansa AG, TAP faces broad cutbacks on routes, its fleet, and the workforce. It was already in the red heading into the pandemic, notching up a 106 million-euro loss in 2019, and a similar outflow the year before, even though Portugal was enjoying record numbers of visitors.

Successive governments have propped up the airline, given its key role in tourism and a hub in Lisbon that serves the former colonies of Brazil and African nations including Angola.

With the state set to become the controlling shareholder, the new management team will also face tough opposition from unions representing pilots, said Paulo Portas, a former deputy prime minister in the government that approved the sale of a 61% stake to Atlantic Gateway. The holding company, which ended up with a 45% stake after a new government altered the deal, is owned by Neeleman and Portuguese investor Humberto Pedrosa.

Pedrosa will remain a shareholder in TAP with a 22.5% stake, and the airline’s workers will continue holding 5%.“TAP will have the state as the boss and the state as a boss means strikes, strikes and more strikes,” Portas said in his weekly television commentary on TVI on July 5.