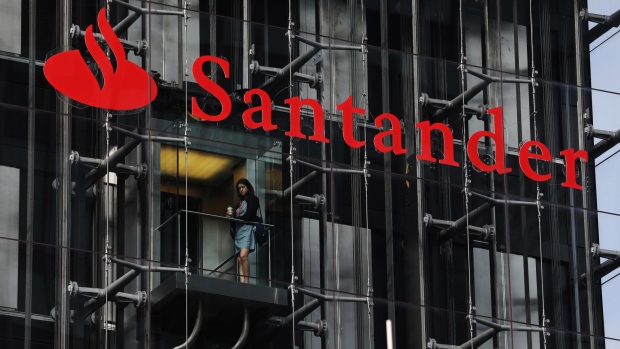 An employee travels in a lift at the offices of Banco Santander SA in London, U.K., on Tuesday, Aug. 15, 2017. Banco Santander, Spain’s biggest lender, has bought minority stakes in three financial-technology firms as Chairman Ana Botin makes machine learning a hallmark of her growth plan. , Bloomberg

(Bloomberg) -- Some of Portugal’s biggest banks are closing the accounts of digital-currency exchanges, a move that could deal a blow to one of Europe’s most crypto-friendly destinations.

At least two other crypto exchanges in Portugal have also been hit by bank account closures this year. Crypto firm Mind the Coin has been unable to open an account for months after all of its accounts in Portugal were shuttered earlier this year, said Pedro Guimaraes, the company’s founder. Rival Luso Digital Assets also had some of its accounts shut down in Portugal this year, Chief Product Officer Ricardo Filipe said.

Banco Comercial said in an emailed statement that its duty is to inform the competent authorities whenever it sees “suspicious transactions,” which may also determine the termination of banking relationships with certain entities. A Banco Santander representative said the lender acts in “accordance with its perception of risk” and that any decision to maintain an account depends on “several factors.”

“We now have to rely on using accounts outside Portugal to run the exchange,” said Borges, whose company last year was the first to receive a license from the central bank to operate in Portugal. CriptoLoja always informed authorities of suspicious operations, he said.

“All the compliance and reporting procedures have been followed,” he said.

While it is unclear if any other crypto companies have had their accounts closed this year, the moves affect three out of the five virtual coin exchanges with a central bank license and could signal a toughening environment for Portugal’s digital-assets sector. The southern European nation became a haven for crypto enthusiasts during the Covid-19 pandemic becasue of its zero-percent taxes on digital-currency gains, affordable living costs and mild temperatures all-year round.

“While there is no official explanation, some banks just tell us they don’t want to work with crypto companies,” said Guimaraes. “It’s almost impossible to start a crypto business in Portugal right now.”