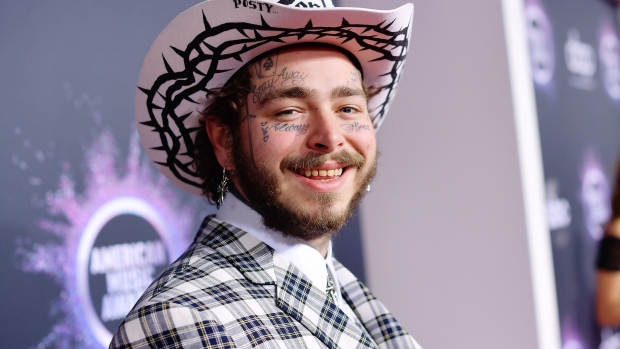 On the night of Thursday, March 12, just hours after some of the world’s largest concert promoters urged a moratorium on live events due to the spreading coronavirus, 18,000 people packed into the Pepsi Center in downtown Denver to watch Post Malone perform. “If I get the coronavirus at the Post Malone concert tonight in Denver just know it was lit,” one fan wrote on Twitter, along with an emoji expressing tears of joy.

Such blind devotion is not uncommon among admirers of Post Malone, a 24-year-old Texan whose real name is Austin Richard Post. Last year, his music was listened to more times than any artist in the U.S., according to MRC Data, and he generated more than 1.6 billion views on YouTube in the U.S., second only to Louisiana rapper YoungBoy Never Broke Again.

In Bloomberg’s new Pop Star Power Rankings, which grade artists’ earnings ability based on six criteria across touring, album sales and social media, Post Malone debuts at No. 10 for the month of March, thanks to the continued sales of his latest album, “Hollywood’s Bleeding.” Looking back at the 2019 data, Post would have ranked No. 1 for the entire year.

“This guy is never really off the radar,” said David Bakula, the head of analytics at MRC Data. “Every single week he is streaming like crazy.”  Bakula has seen the rise and fall of every pop star over the past couple of decades. Post is the first act he’s seen who gets equal amounts of play on mainstream Top 40 radio, alternative rock and hip-hop stations.

Post even has a following among fans of country music. Before Goldenvoice postponed its annual Stagecoach festival, which occurs the weekend after Coachella, it had asked Post to perform. “We don’t box him into any genre,” said his agent Cheryl Paglierani.

The unrelenting rise of Post Malone kicked off in February 2015 when he released an independently produced single titled “White Iverson” on Soundcloud, the free audio distribution platform. The spacey, laconic song drew an analogy between his lyrical skills and the basketball prowess of Allen Iverson, the 11-time National Basketball Association All-Star. To some listeners, the comparison didn’t seem all that far-fetched, and the song did well enough online to land Post a deal with Republic Records, the home of Taylor Swift, Ariana Grande and Drake.

Executives at Republic, led by brothers Monte and Avery Lipman, are famous for their reliance on data to drive big signings. They see a song bubbling up on the internet and put the full force of their promotional machine behind it. The video for “White Iverson” was generating millions of views on YouTube, and they were convinced they could turn the song into the biggest hit in the world.

They were wrong. Radio stations didn’t give the song much love, and it petered out midchart, peaking outside the top 10. For a moment, executives at Republic Records fretted their new signing might not live up to their expectations.  Perhaps he was less of an Allen Iverson and more of a Bobby Hurley?

To broaden his base of support beyond some kids on the internet, Paglierani decided to send him on the road. On tour with SBTRKT, Post began winning over fans of electronic music. From there, he started opening for Fetty Wap, a rapper from New Jersey. Then, in March 2016, he landed a coveted spot opening for Justin Bieber on his summer tour. “That was a game changer,” said Paglierani. “It opened him up to a new audience and put him in front of thousands of teen girls every night, very different from the hardcore hip-hop audience at Fetty Wap.”

Post released his first studio album, “Stoney,” in December 2016. It debuted at No. 6 on the Billboard charts, got steady attention on streaming services and eventually worked its way into rotation on the radio. In October 2017, “Rockstar,” featuring 21 Savage, became Post’s first No. 1 song.

At the time, Post was still known primarily as a rapper, but while on tour for “Stoney,” he proved he didn’t fit neatly into any genre. For two years, his team had been begging him to play a guitar on stage. Post had grown up on country music, but he was reluctant to play in front of a crowd. Halfway through the tour, he changed his mind. From then on, he plucked the strings vigorously each night in front of adoring fans in soldout clubs across the country.

When Post released his follow-up, “Beerbongs & Bentleys,” in the spring of 2018, the market was primed. He sold 461,000 copies in one week, earning his first No. 1 album. “Beerbongs & Bentleys” stayed in the top 20 for a year and a half. “That just doesn’t happen,” said Bakula.

Even so, many critics were unimpressed. “The most popular young artist in the most unpopular young nation is a rhinestone cowboy who looks like he crawled out of a primordial swamp of nacho cheese,” Jeff Weiss, a prominent music writer, wrote in the Washington Post in October 2018. He called Post’s music “one of the shallowest bastardizations of rap to date.”

His fans are not easily dissuaded.  Over the years, Post’s audience has broadened from teens and tweens to include adults. He is as popular in Los Angeles and New York, where he can sell out an arena two nights in a row, as he is in Omaha, Nebraska, where he grossed more than $2 million in ticket sales one night earlier this year.

Record executives compare Post to Nickelback and Creed, two rock bands that never got much respect from critics or awards voters but sold more than 100 million albums between them.

Post is easy to mock, a goofy-looking white guy with face tattoos who endorses Bud Light and Croc shoes. While most pop stars in the age of Instagram craft online personas that seem just a tad too perfect, Post rejects this artificiality. He belongs to the Chrissy Teigen school of social media: Messy is good. His Instagram is littered with photos in which he looks tired and ridiculous. You’re just as likely to see him in pajama pants as Gucci. For many of his fans, that unkempt relatability is central to his appeal. “He doesn’t care what other people think,” said James, a Wisconsin resident who oversees a Post Malone fan account. (He declined to provide his last name or age.) “He seems like a genuine person.”

Amy Snorteland Esposito, 39, a rock-music fan from Port Washington, New York, said she has seen the Dave Matthews Band about 75 times. She fell in love with Post Malone after hearing the song “Sunflower” on the radio. Esposito’s only complaint about her new favorite act is his ample use of swear words. “As a mother of two kids, I curtail the listening they do,” she said. “When they are not in the car, I listen to more of it.”

In February, Esposito and a group of friends drove down to Philadelphia to see Post perform. They packed into Section 106 of the Wells Fargo Center, close enough to feel the pyrotechnic displays.  Esposito was surprised to see how many people over the age of 30 were in attendance. She was also surprised to see a large number of kids. “There is a lot of pop music that is really terrible. It lacks substance. It lacks musical quality,” she said. “His music offers an attainable way to stay fresh and hip.”