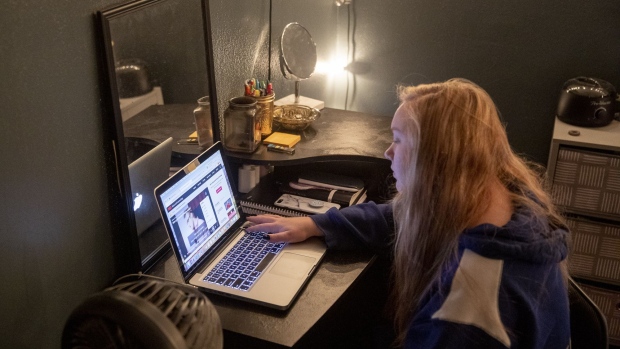 A student listens to a live lecture on a laptop computer at home during a remote learning class in Princeton, Illinois, U.S., on Friday, Sept. 11, 2020. Illinois reported 1,337 new coronavirus cases Wednesday as the state's positivity rate dropped below 4% for the first time in weeks. , Photographer: Bloomberg/Bloomberg

Josephine DiMaurizio's third year of geology studies at Queen's University in Kingston, Ont., was meant to be full of hands-on course work, with multiple large field trips and days in the lab.

But the COVID-19 pandemic has left her stuck behind a computer for all her classes, with some of her field work cancelled and larger trips postponed indefinitely.
As she approaches her fourth and final year, DiMaurizio said she would consider deferring in the fall if the pandemic continues to force online learning as her only option.

DiMaurizio is one of many university students questioning whether it's worth paying full tuition for a relatively limited university experience without laboratory work and the campus life experience.

"My third year was supposed to be the most hands-on experience time I would get in my program, and that was a huge reason I came to this school and did this program," said DiMaurizio, who is currently back home in St. Catharines, Ont.

"I was really disappointed about it, but there wasn't really much I could do."

Statistics Canada reported in October that 20 per cent of students aged 17-24 did not plan to return to school the following semester when they were asked at the beginning of the pandemic. The same report also showed the Canadian universities stand to lose between $377 million and $3.4 billion -- 0.8 per cent to 7.5 per cent of their total revenues -- this academic year, largely because of a drop in the number of foreign students.

The government agency is still collecting data on the affect of the pandemic on post-secondary education this year.

In the end, DiMaurizio said she went ahead with online learning this year because the pandemic prevented her from doing anything worthwhile with a year off.

But as the spread of COVID-19 worsens, DiMaurizio said she would consider deferring in the fall if universities are forced to cancel in-person classes for her final year.

"Not getting that hands-on experience has been a bit challenging," she said, adding that some of her final courses would have consisted entirely of field work.

But for others, the pandemic has actually pushed them towards school.

Rajat Ram, who used to work in Toronto's hospitality industry, said he would have spent years working in the field if COVID-19 didn't leave him without work.

"When COVID hit, I got laid off immediately," said Ram.

"I was basically a sitting duck at home, I wasn't sure if I was going back to my original workplace."

After months of unsuccessfully looking for work, Ram decided the pandemic was a good time to go back to school for a three-year course on data analytics and programming at George Brown College in Toronto.

He said he's eligible for between $400-$600 dollars in student funding through a pandemic support program by George Brown. Since tuition for his program costs about $2500 per semester, he said the savings made a big difference on his decision.

Ram said he had asked friends about the pros and cons around online learning and decided it would be worth it to get a start on the program.

"I got both sides of it, some people really enjoyed going to school from home but some felt they weren't getting the whole experience," said Ram.
He's holding on to hope that most of the course will take place in-person as Canada rolls out it's vaccination program.

Meanwhile in St. Catharines, DiMaurizio says she's split 50/50 about whether she should go through with her final year of university online.
"If there was something else I could do (next year) that would be a really good experience, I would consider that… but I don't know if that's going to play out."