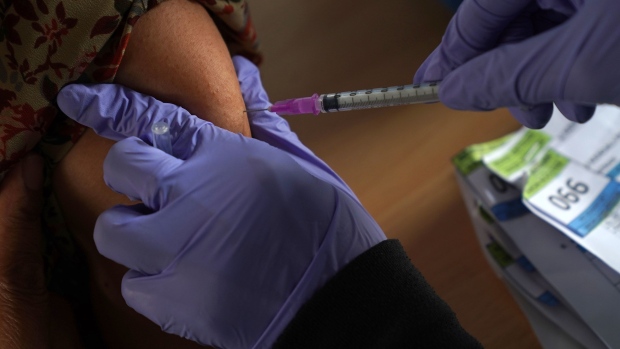 A healthcare worker administers a dose of the Pfizer-BioNTech Covid-19 vaccine at a health center in Jakarta, Indonesia, on Thursday, Jan. 13, 2022. Indonesia is prioritizing elderly and at-risk people to receive booster shots in a program started on Wednesday. Photographer: Dimas Ardian/Bloomberg , Bloomberg

(Bloomberg) -- Changes to periods reported by women who received the Covid-19 vaccine are short-lived and smaller compared with those that occur naturally, according to two observational studies in the U.S. and Norway.

The findings should be reassuring to women, said Victoria Male, a reproductive specialist at Imperial College London, in an editorial published Wednesday in the BMJ.

The U.S. study, which looked at data from a menstrual cycle tracking app for almost 4,000 Americans, found the second dose may delay the next menstruation by almost half a day. The first dose didn’t have any effect on the timing of the first period after vaccination, the study said.

The share of women reporting menstrual changes such as worse-than-normal period pain was little changed after the first and second shots, compared to pre-vaccination levels, a separate study from Norway showed. While 38% of the 5,688 Norwegians surveyed said they had at least one change from normal in their periods before the vaccine, that only increased to 39% after the first dose and 41% after the second dose. The most common change that was reported after vaccination was a heavier than normal period.

Worries that vaccines may impact menstrual cycles have prompted the U.S. National Institutes of Health to spend $1.67 million to study a potential link.

Still, data from the U.S. and Norway may provide limited insights for British women, Male said. Unlike in the U.S. and Norway where the interval between the first and second dose is about three to four weeks, women in the U.K. generally do not receive both doses during the same menstrual cycle.