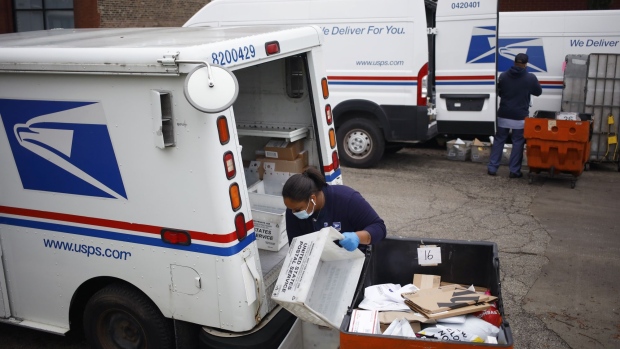 Workers load mail into delivery vehicles outside a United States Postal Service (USPS) distribution center in Chicago, Illinois, U.S., on Tuesday, Oct. 12, 2021. FedEx, UPS, Amazon.com and the U.S. Postal Service are busy hiring temporary and part-time workers ahead of the peak season, which will start to ramp up in November. Competition will be fierce for labor in and out of the parcel industry. , Bloomberg

The Postal Service last year awarded a 10-year contract to Oshkosh Corp. for as many as 165,000 delivery vehicles. Those would get better mileage than existing delivery vans and include safety measures such as automatic braking and a driver air bag.

The Environmental Protection Agency and the White House Council on Environmental Quality last week said they are pushing for more electric vehicles to reduce the carbon footprint of one of the world’s largest government fleets.

The Postal Service is conducting “a bald-faced attempt to get the taxpayer to pay for electric vehicles” when the agency by law is supposed to be self-funding, Paul Steidler, a senior fellow at the Lexington Institute, which advocates for limited government, said in an interview. The service could fund more electric vehicles without extra help from taxpayers, Steidler said.

The Postal Service generally receives no tax dollars for operating expenses and relies on the sale of postage, products and services to fund its operations.

The U.S. House plans to vote on a Postal Service reform act in the coming days.