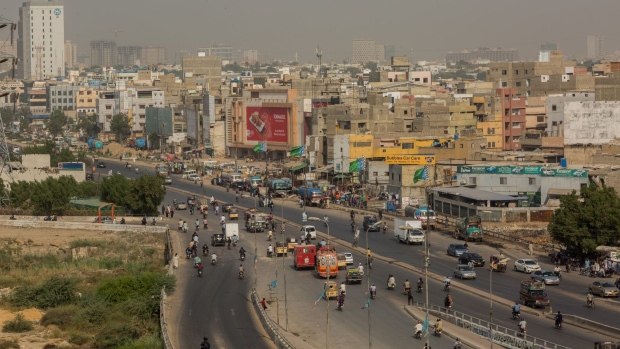 Vehicles travel along a road in the Clifton area of Karachi, Pakistan, on Friday, Oct. 16, 2020. Karachi ranks as having the worst public transport system globally, according to a 2019 study by car-parts company Mister Auto that looked at 100 major cities. Photographer: Asim Hafeez/Bloomberg , Bloomberg

(Bloomberg) -- Pakistan startup PostEx, a provider of courier and financing to e-commerce companies, completed one of the country’s largest early-stage funding to help with its expansion plans.

The Lahore-based startup raised $8.6 million through multiple tranches in its seed funding, according to its founder Muhammad Omer Khan. The latest tranche was led by Global Founders Capital, and also included first-time investments by FJ Labs and RTP Global in Pakistan.

The startup scene in the world’s fifth-largest nation is having a breakout year. Over $300 million has flowed into Pakistan’s nascent technology sector in 2021, more than in the previous six years combined.

Khan moved back to Pakistan from Dubai to start the venture after discovering more than 90% of the country’s online shopping is done with post-delivery cash payments rather than electronic transactions, resulting in the funds of businesses being held up for weeks.

PostEx, which began in April, helps e-commerce businesses solve working capital problems by giving them cash before making deliveries and providing them finance to run their businesses.

“The space has been underserved by traditional financial providers. Banks would not loan to e-commerce platforms because they don’t have anything to put as a collateral,” Khan said in an interview. “We know their business. We understand that they’re growing very fast. So why not just use that as a collateral?”

The company will use the funds to expand into 15 to 20 more cities in Pakistan, increase its workforce and launch more fintech products, he said. Other investors included MSA Capital, VentureSouq, Alma Capital and Zayn Capital.

Pakistan’s e-commerce industry has lured the most investment in the recent funding rush. The majority of the population still hasn’t switched to online shopping, providing room for the sector to grow and transactions to reach $10 billion before 2025 from about $6 billion now, Khan estimates.

The held-up cash “was slowing growth down for e-commerce companies,” said Khan. “We’re trying to build a solution and help them grow.”