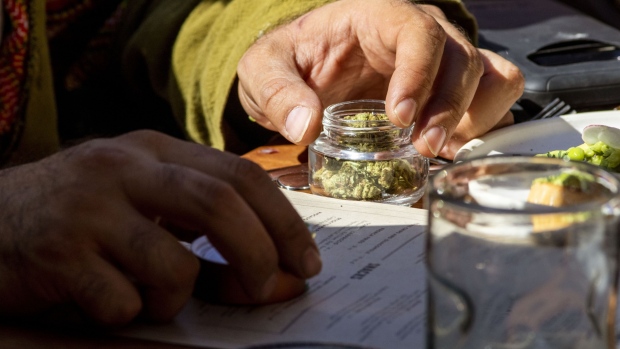 A customer holds a jar of marijuana at the Lowell Cafe, a new cannabis lounge in West Hollywood, California, Oct. 1, 2019. , Bloomberg/Kyle Grillot

Although President Donald Trump said the latest coronavirus relief package passed by the House would be “DOA” in the Senate, there’s a real possibility its marijuana banking provisions will survive, according to a prominent Washington cannabis lawyer.

The Heroes Act, as it’s known, includes legislation that would allow banks to service state-legal cannabis companies. The measures have been endorsed by a bipartisan group of 34 attorneys-general, who said the pandemic has only exacerbated health and safety concerns around the handling of cash. Currently, many dispensaries operate on a cash-only basis because they can’t access routine banking services.

The final version of the bill “will likely look markedly different from the original version,” said Saphira Galoob, executive director of the National Cannabis Roundtable and CEO of the Liaison Group, a subsidiary of law firm Greenspoon Marder.

However, cannabis banking has strong bipartisan support, she said, pointing to the fact that legislation known as the SAFE Banking Act was already passed in the House with a large majority, including 91 Republicans, and was co-sponsored by over a third of the Senate before the pandemic hit. In addition, Republican Senators may be more willing to pass the legislation as part of a broader bill than as a standalone effort.

“Industry advocates are communicating to congressional members that SAFE is no longer only a public safety bill. SAFE Banking is now a public health and economic stimulus bill as well,” Galoob said. “Significant advocacy will be required for there to be any chance of success. However, given both the evolving politics and policy considerations, SAFE Banking is in the best position to become law since its introduction.”

Cowen analyst Jaret Seiberg said the banking provisions are likely to get dropped from the final version of the bill, but “it could set the stage for inclusion in the year-end spending bill or its adoption during the lame duck after the election.”

However, Bloomberg Intelligence’s Nathan Dean disagreed, saying it will be difficult to pass any cannabis banking legislation this year.

“In our view, it would take active backing from President Donald Trump to move the measure forward,” Dean said in a recent note. “While House Democrats attached the measure to their most recent Covid-19 relief package in May, we continue to expect Senate Republicans to resist and likely ignore or strip out the provision when they announce their stimulus plans.”