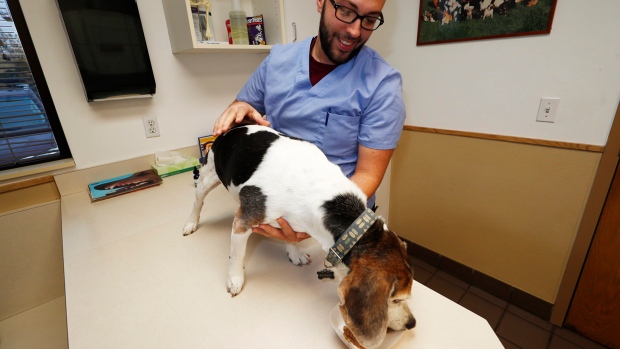 In this Monday, Oct. 30, 2017, photo, Luke Byerly guides his 14-year-old beagle, Robbie, as the dog eats his food treated with CBD oil during a break at Byerly's job as a technician at a veterinary clinic in east Denver. People anxious to relieve suffering in their pets are increasingly turning to oils and powders that contain CBDs, a non-psychoactive component of marijuana. , The Associated Press/David Zalubowski

TORONTO -- Canadian pets are a few steps closer to getting their paws on pot-based medical treatments in Canada as more cannabis companies research marijuana's efficacy for companion animals.

Canopy Growth Corp. is the latest medical marijuana company to enter the potentially lucrative pet market with its announcement this week that it will embark on a Health Canada-approved clinical trial to research the use of cannabis-based products to treat animal anxiety.

The Canadian Veterinary Medical Association's Dr. Shane Renwick says there's been a flurry of cannabis-related pet health research as Canada's laws on recreational cannabis crystallize ahead of legalization on Oct. 17.

The association's national issues and animal welfare manager expects there to be more clinical trials in the pipeline going forward.

"We hope that there will be the research required to allow safe registered products on the market in the not-too-distant future... It will offer alternatives in a lot of cases to medications we're currently using for a variety of conditions," Renwick added. "So it's an exciting potential that we see."

Dr. Renwick said the association's members have fielded many queries from clients asking about treating their pets ailments, such as pain, with cannabis. However, there is no legal avenue for veterinarians to prescribe pot, unlike for medical physicians, and not enough clinical evidence to support it, he added.

The association is hopeful that Health Canada will eventually approve some cannabis-based veterinary health products that its members can prescribe for their pet clients, and each clinical trial approval brings them "one step closer" in the process, he said.

Many cannabis companies have been positioning themselves to cash in on the drug's potential for pets as the country prepares up to for legalization of cannabis for adult use this fall.

Canopy on Wednesday announced it got the green light from the Veterinary Drug Directorate of Health Canada for its research into the use of cannabidiol, also known as CBD, enriched oil to treat anxiety in certain animals. The research will be conducted by Canopy Animal Health, a division of Canopy's affiliated research arm.

"The use of natural-occurring cannabinoids as a therapy for companion animals is a logical new forefront of medical discovery... These trial approvals mark a significant milestone on the journey of making cannabis-based drugs accepted and recommended by veterinarians," said Marc Wayne, managing director, Canopy Health Innovations, in a statement.

True Leaf said that in its 2018 fiscal year, sales of pet products totalled $1.4 million, up 280 per cent from the previous year.

It's tough to quantify the size of the nascent market for cannabis products for pets.

In 2017, sales of cannabis products marketed for pets at medical and adult-use cannabis dispensaries was nearly $7 million in California, Colorado, Oregon and Washington, according to BDS Analytics. In Colorado, sales of pet products grew 49 per cent in 2017, versus growth across all product categories at 15 per cent, it said.

The pet pot segment growth, however, comes from an initially low base and its hard to gauge demand, said Greg Shoenfeld, vice president of operations for BDS Analytics, based in Colorado. However, in an increasingly competitive cannabis landscape, catering to pets can be a differentiator, he said.

"Being able to develop a presence with the pet loving consumer could be a point of strength," Shoenfeld said.

Renwick believes there is a "huge" demand for safe, tested cannabis-based products for pets. The CVMA has been advocating that veterinarians should have the same ability as medical physicians to prescribe them as well.

"Our pets are living longer, generally, cancer and other illnesses can produce a good deal of pain and discomfort for animals near the end of their lives," he said.

"And owners today are much more cognizant of wanting to alleviate any suffering that animals might endure."