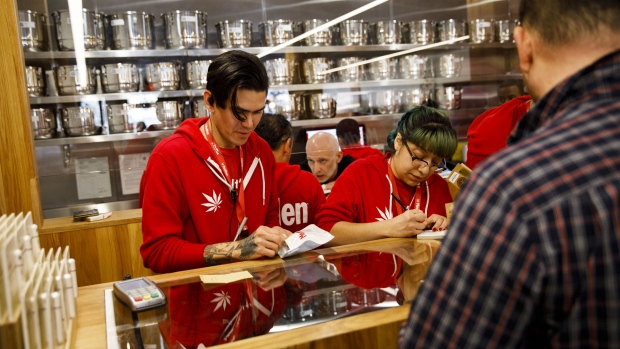 An employee completes a marijuana purchase for a customer at the MedMen dispensary in West Hollywood, California, U.S., on Tuesday, January 2, 2018. , Patrick T. Fallon/Bloomberg

Capital-hungry pot companies are increasingly selling off their real estate as other sources of financing dry up.

With cannabis stocks down nearly 60 per cent since their highs in March, producers that previously relied on issuing shares to raise money have been left with few alternatives, particularly in the U.S. where the drug remains federally illegal. Sale-leaseback transactions have stepped in to fill the void, becoming a key financial lifeline for an industry that needs capital to fund expansion.

Innovative Industrial Properties Inc., the largest cannabis-focused real estate investment trust and the only publicly traded one, has done US$375.6 million worth of deals in 2019 and the pace has picked up over the course of the year, according to its chief executive officer.

“It’s becoming more and more attractive for operators because of the scarcity of alternatives out there,” said Paul Smithers, CEO of San Diego-based Innovative, which is more commonly known by its stock symbol IIPR. “Our pipeline has never been more vigorous than it is today.”

With pot illegal federally in the U.S., many companies in the industry struggled to find landlords willing to rent space and ended up owning property. Now, they’re using those assets to get capital, particularly with investors wary of putting their money into weed.

The legal marijuana industry has developed more slowly than expected in both the U.S. and Canada and investors have taken notice: in the week ended Oct. 25, cannabis companies raised a total of US$26.8 million in equity and debt, compared with US$707.8 million in the same period of 2018, according to Viridian Capital Advisors. 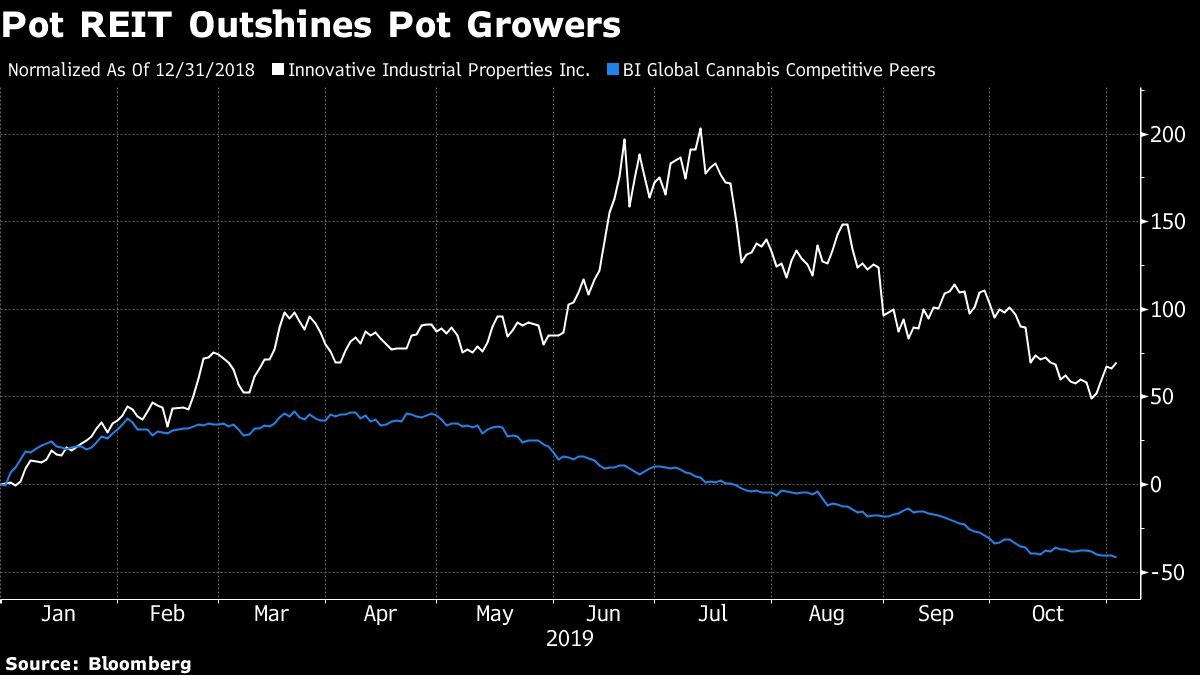 This has benefited REITs like IIPR, which owns 38 U.S. cannabis properties totaling 2.8 million rentable square feet. As of Oct. 30, IIPR’s yield on invested capital was 13.8 per cent.

The model has also proven to be popular with investors, with IIPR’s stock up 70 per cent year-to-date compared with a 42 per cent decline in the BI Global Cannabis Competitive Peers index.

“When we talk to investors, they get comfort that we are a real estate company foremost,” Smithers said in a phone interview. “We’re not unlike a utility. We’re the picks and shovels, if you will.”

To be sure, the use of sale-leasebacks, which are popular in other industries, could wane in popularity if other financing options begin to open up. The SAFE Banking Act aims to allow banks to do business with legal cannabis companies and could make it easier for U.S. pot firms to raise money.

For now, the real estate transactions are providing an immediate cash infusion, and many deals are structured to reimburse sellers for the cost of future improvements made to the property.

Owning your real estate is sometimes not the most ideal use of capital, said Joe Caltabiano, president of Cresco Labs Inc., which recently sold two Illinois properties to IIPR for US$32.8 million.

GreenAcreage completed a US$141 million private placement in August and is working to close transactions with Acreage worth more than US$70 million, including construction commitments. It’s also in talks with other cannabis companies, according to CEO Katie Barthmaier.

“I’ve never seen a story that makes so much sense because these companies don’t have many alternatives,” said Barthmaier, who previously managed investments at global REIT W.P. Carey Inc.

The sale-leaseback route isn’t for everyone, however. For 4Front Ventures Corp., capitalization rates north of 16 per cent were simply too costly to pursue when it first examined the possibility a couple of years ago.

“It was relatively expensive capital in an industry where capital tends to be on the expensive side to begin with,” said 4Front CEO Josh Rosen. “We ended up sourcing a more traditional five-year loan that we thought penciled out significantly better than a sale-leaseback.”