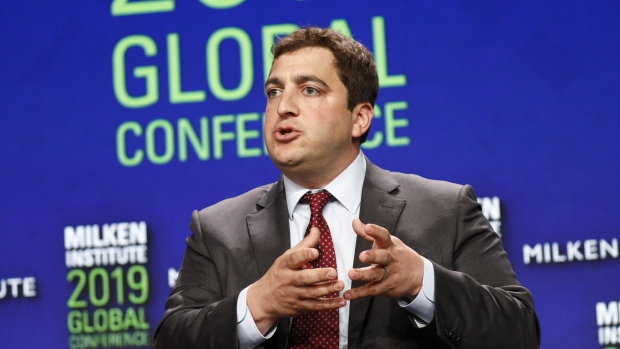 Ben Kovler, founder and chief executive officer of Green Thumb Industries Inc., speaks during the Milken Institute Global Conference in Beverly Hills, California, U.S., on Tuesday, April 30, 2019. The conference brings together leaders in business, government, technology, philanthropy, academia, and the media to discuss actionable and collaborative solutions to some of the most important questions of our time. Photographer: Patrick T. Fallon/Bloomberg , Bloomberg

The firm issued the three-year securities at an interest rate of 12 percent, according to a statement Thursday. That’s above the 9.9 percent yield in a Bloomberg Barclays total return index of U.S. high yield debt, rated CCC and excluding financials.

Cannabis companies have been equity market darlings as investors bet legalization of recreational marijuana will spread around the world following Canada’s move last October. Their ability to issue straight bonds has been more limited as most firms aren’t cash flow positive and banks are reluctant to arrange deals with the drug still illegal at the federal level in the U.S.

However, there have been some convertible issues, including from Canopy Growth Corp., Aurora Cannabis Inc. and Tilray Inc. -- the industry’s largest companies. Also, some banks such as Bank of Montreal have provided loans to cannabis companies with operations in Canada.

Green Thumb’s “bonds aren’t convertibles, they are straight debt,” said Andrew Grossman, the company’s head of capital markets, who arranged the deal with an in-house team. “We believe that this is the first for the industry.”

Green Thumb has the option to extend duration for an additional year, as well as increase the size of the transaction by an additional $45 million over the next six months, the company said. Green Thumb plans to use the proceeds to finance expansion.

In addition to interest payments, bondholders will receive warrants that can be converted into as many as 1.82 million subordinated shares over the next four years at a price of C$19.39 a piece. Shares in the Chicago-based company traded up 1.2% to C$15.62 in Toronto at 1:22 p.m.

“This is very shareholder-friendly financing, because they are barely getting diluted as a result of that deal,” said Grossman in a phone interview. “When the regulatory environment allows for us to tap the public markets and lower our cost of capital we will.’

To contact the editors responsible for this story: David Scanlan at dscanlan@bloomberg.net, ;Nikolaj Gammeltoft at ngammeltoft@bloomberg.net, Jacqueline Thorpe