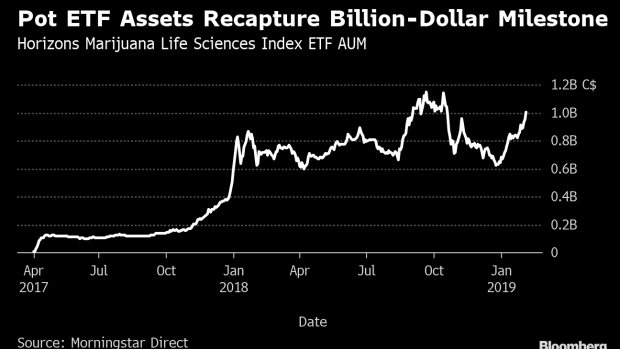 (Bloomberg) -- Canada’s two biggest cannabis companies report earnings this week, giving us the first glimpse -- however murky -- of what recreational sales look like.

Aurora Cannabis Inc. reports fiscal 2018 earnings Monday morning and Canopy Growth Corp. reports Thursday after the close, followed by an analyst call on Friday. These earnings won’t tell us much about what normalized legal sales will look like, as there were plenty of headwinds in the final quarter of 2018 that will undoubtedly impact results.

However, they will help investors “gain a window into how the overall Canadian adult-use market is progressing, as well as the relative ability for LPs to execute and gain market share early on,” Eight Capital analyst Graeme Kreindler wrote in a note last week. Kreindler expects significant quarter-over-quarter growth in revenue, offset by higher costs and no meaningful cash flow or earnings before interest, taxes, depreciation and amortization.

Canada legalized pot on Oct. 17 but the rollout was by no means uniform across the country. Ontario, the most populous province, still doesn’t have any physical stores, and severe supply shortages forced other provinces to take unusual measures. Quebec, for example, had to shut its government-run pot stores three days a week while Alberta temporarily stopped issuing retail licenses.

Still, commentary from the two largest cannabis companies by market value should provide some much-needed clarity on whether the supply-chain problems that have caused the shortages are being sorted out, and whether sales are picking up in the current quarter.

It will also be interesting to hear what they have to say about their plans for the U.S. market now that hemp-derived CBD is legal. Canopy has already said it intends to spend as much as $150 million to build a “hemp industrial park” in New York state but hasn’t given many details beyond that.

In terms of results, we already have some clarity from Aurora, which said last month that it expects to report revenue of C$50 million ($38 million) to C$55 million for the quarter ended Dec. 31, up 327 percent from the same period a year ago. Canopy hasn’t provided advanced guidance but the pot producer is expected to report revenue of C$84.1 million and adjusted earnings per share of 16 cents, according to the average of analysts’ estimates compiled by Bloomberg, up from C$21.7 million and 5 cents a year ago.

Although last week was a mixed one for pot stocks, the rally since the beginning of the year has pushed them back toward pre-legalization highs, boosting the exchange-traded funds that follow the sector. Assets in the Horizons Marijuana Life Sciences Index ETF, the first ETF to track the cannabis industry, rose above C$1 billion for the first time since Oct. 18, the day after Canada legalized recreational pot, after dipping as low as C$624 million a few days before Christmas.

South of the border, the ETFMG Alternative Harvest ETF also got a boost from the recent rally, surpassing $1 billion in assets for the first time last week, before dipping back.

The rally comes amid potential political catalysts in the U.S., including last week’s House Financial Services Committee hearing entitled “Challenges and Solutions: Access to Banking Services for Cannabis-Related Businesses.” The goal is to open up banking to the U.S. cannabis industry, which has faced difficulty getting financial services because of federal law.

Analysts were cautiously optimistic on the hearing (to use an overused phrase). It’s an “undeniably bullish signal” for the industry but could “languish in legislative purgatory” if it becomes tied up in the broader legalization debate, according to Compass Point analyst Isaac Boltansky. Despite the threat of purgatory, Boltansky believes there’s a 75 percent chance that this Congress will provide banking clarity for pot companies operating in legal states.

Jaret Seiberg at Cowen was slightly less optimistic, calling the hearing a “positive first step” but cautioning that getting the Senate to act won’t be easy and the legislative process could stretch to the 2020 presidential election. “We appreciate the enthusiasm that the cannabis industry has for quick action in Congress, but that is not how Washington works,” he wrote.

To contact the editors responsible for this story: Courtney Dentch at cdentch1@bloomberg.net, ;David Scanlan at dscanlan@bloomberg.net, Jacqueline Thorpe