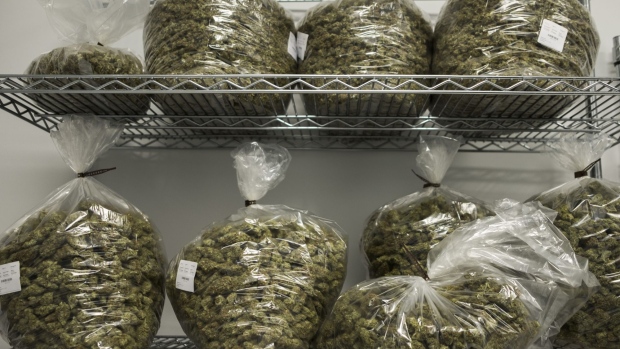 (Bloomberg) -- Cannabis companies, forced to deal in cash only due to the federal illegality of their product, saw some legislative headway toward change last week. But there’s still a long way to go before they can bank like regular companies.

The so-called SAFE Banking Act, which would let banks deal with cannabis companies without fear of penalty, was approved by voice vote in the lower house last week as part of the broader National Defense Authorization Act. Now its fate depends largely on the Senate.

But if the initiative falters there -- not an unlikely outcome, given the lower house has now approved the SAFE act five times and senators still haven’t moved forward on it -- it wouldn’t be all bad.

While SAFE would give relief to companies that are paying their taxes with duffel bags full of cash, and ease their need for expensive security guards and armored cars, the bill still doesn’t include language on other key issues. These include the tax rule that keeps cannabis companies from taking deductions or the ongoing prohibition that prevents them from listing on U.S. stock exchanges.

Since the largest cannabis companies have figured out ways to get around operating in cash only, SAFE would mostly help smaller businesses and new entrants to the market, said Saphira Galoob, chief executive officer of the Liaison Group, a Washington-based lobbying firm for the cannabis industry. Galoob, who is also executive director of the National Cannabis Roundtable, has been working on SAFE since 2016, and she admits it’s far from perfect.

“SAFE banking is an important first step toward the comprehensive reform that the industry deserves, but it doesn’t do everything we want and everything we need,” Galoob told me.

Even if it gets implemented, she said, larger institutions may continue to shy away from the industry. “Loans will be feasible, but it will be a bank-by-bank decision,” she said. While the bill would boost lending opportunities, it wouldn’t do so as much as full legalization would, she added.

BTIG analyst Camilo Lyon has speculated that Senate Majority Leader Chuck Schumer could exclude the bill from the National Defense Authorization Act in order to create momentum for a broader legislation that he’s been championing, the Cannabis Administration and Opportunity Act. While that would create more uncertainty on timing, it could mean SAFE gets expanded to cover taxes, public listings and include provisions to help minorities join the cannabis industry, Lyon wrote in a Sept. 22 research note.

Lyon wrote about the possibility that SAFE could pass the Senate in November or early December in its current form, while a “SAFE +” could take longer, perhaps next March or April.

Even if a longer timeline could mean a more broad-based SAFE act, Galoob said it will do more good for the industry to have a simpler version of the act sooner.

Adding more provisions to it now “will be a lift beyond what is politically viable at this point,” Galoob said. “Having actual change in the short term will be more beneficial to the trajectory of the industry.”

“This is a public safety and national security matter, very germane to the issues at hand -- dealing with foreign cartels and particularly the cash that is developed by this business that leads to crime. And we have seen murders, robberies, assaults and then the potential for foreign malignant forces to get into the cannabis industry here in the United States,” said Rep. Ed Perlmutter, a Colorado Democrat, during a floor speech in which he urged the SAFE act be included with the National Defense Authorization Act.