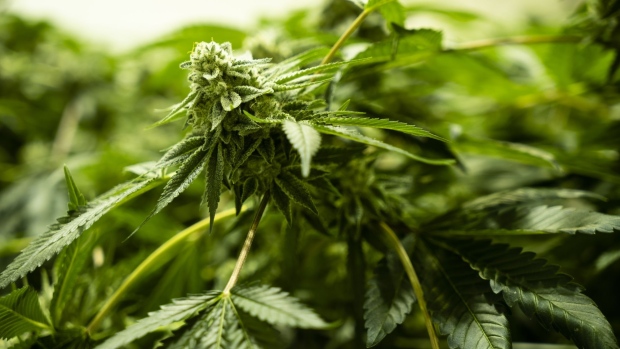 Cannabis plants grow inside a Fotmer SA flowering room in Canelones, Uruguay, on Wednesday, Feb. 27, 2019. In 2013 Uruguay became the first nation to legalize recreational marijuana, and now companies are looking outside their local market to turn the nation into a global medical marijuana leader. Photographer: Eilon Paz/Bloomberg , Bloomberg

(Bloomberg) -- Consumers are already paying more for organic coffee, organic strawberries and clothing made with organic fibers. Why not organic cannabis?

That’s the thinking of a growing number of producers around the globe looking for a way to distinguish themselves in an increasingly crowded marketplace.

“We believe that in five years everything is going to trend toward organic,” said Boreal Uruguay Chairman Gonzalo Aguiar, whose firm recently opened one of Latin America’s largest cannabis drying facilities. Organic hemp flowers high in CBD already fetch $600,000 to $800,000 per metric ton in Europe. That’s a 30% premium over regular flowers, he said, but growers must be able to document every step -- from seed through the drying process.

While information on the market for organic marijuana is scarce, overall demand for cannabis is expected to surge through the middle of the next decade as more countries loosen their drug laws. BDSA, an industry research firm, sees global legal cannabis sales more than tripling from last year to $46.6 billion in 2025.

In Uruguay, cannabis producers can obtain certification from specialists such as Argentina-based Organizacion Internacional Agropecuaria SA. The nation’s seed agency, Inase, also plans to offer organic certification during the first half of next year.

In the U.S., there’s a significant hurdle: Products can only be marketed “organic” if they are certified by the Department of Agriculture. But since cannabis is illegal at the federal level, there’s no way cannabis producers can officially be graded as organic, said Cooper Ashley, a data analyst at cannabis data provider Headset.

Instead, a third-party organization called “Clean Green” is offering its own certification, which is similar to what the USDA calls organic. Although it’s not officially comparable, “we can use their certifications to identify brands that have jumped through significant hoops in order to market themselves as ‘Clean Green Certified,’” Ashley said, citing brands like Raw Garden, Dixie Elixirs and 48North.

Brother David’s, a not-for-profit cannabis producer run by David Bronner, the head of Dr. Bronner’s Magic Soaps, is also trying to bridge the certification void cannabis faces in the U.S. Dr. Bronner’s is launching a special cannabis-scented soap to help expand a certification program to make it a nationwide standard.

The plan, known as Sun + Earth Certified, aims to verify that cannabis products are pesticide-free and adhere to labor and environmental standards on par with the USDA’s grades for food. “It’s a way of giving small-scale farmers more power,” Bronner said in a phone interview.

In Uruguay, which is one of the world’s most established export markets for cannabis, local grower Colfores plans to obtain organic certification from Inase for its seeds for CBD-rich hemp, which it expects to sell next year to medical cannabis producers in Germany, Israel, Canada and Switzerland, according to Chief Executive Officer Veronica Quintela. The seeds are expected to fetch a higher price than non-organic ones.

Going organic isn’t for everyone, though. Some predict that lab-synthesized cannabinoids will compete with plants as a source for pharmaceutical products. Certain organic certification requirements would make it difficult for medical cannabis producers like Uruguay’s Fotmer SA to consistently produce the large volumes of high-quality cannabis that it needs to ship to Europe and beyond, according to CEO Jordan Lewis.

“While I believe there is a niche for organic cannabis, I don’t believe that it is going to be the dominant product,” he said in an interview.

“The MORE Act will have hearings, but I don’t see full legalization coming. I think that rescheduling is something some people would prefer to happen. I think the pharmaceutical and alcohol lobby would be delighted if that happened because then cannabis would be regulated as if it was a prescription drug, and they’re geared up to deal with the record-keeping and compliance for regulated substances.” -- Jodi Avergun, a former DEA chief of staff and federal prosecutor who now leads Cadwalader, Wickersham & Taft’s white-collar defense and investigations group.