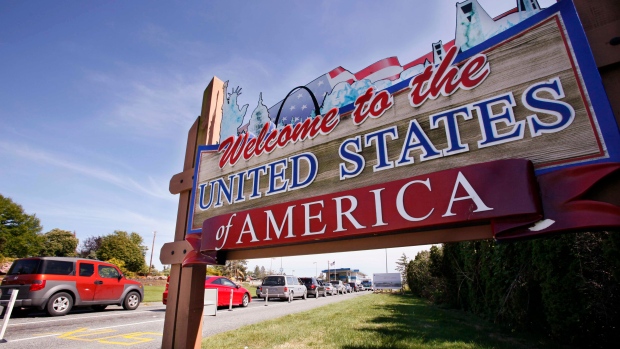 Cars entering the U.S. pass a welcome sign Saturday, May 30, 2009, at the border crossing between the U.S. and Canada, in Blaine, Wash. , AP Photo/Elaine Thompson

A spokeswoman for U.S. Customs and Border Protection said that even if a Canadian traveller's business does not operate in the U.S., they could be denied entry if their travel activities are cannabis-related.

"If the purpose of travel is unrelated to the marijuana industry such as a vacation, shopping trip, visit to relatives, they will generally be admissible to the U.S. however if they are coming for reasons related to the industry, such as the conference... they may be found inadmissible," said Stephanie Malin, U.S. CBP's branch chief for northern/coastal regions in an email.

On Oct. 17, Canada became the second country in the world after Uruguay to legalize cannabis for recreational use.

The revised stance was welcomed by the sector, but did not offer clarity as to whether business travel activities for those without direct U.S. involvement would be a red flag under its policies as well.

Meanwhile, Canadian cannabis companies have listed their shares on U.S. stock exchanges -- a requirement of which is not having direct involvement in the American pot industry -- and are also increasingly eyeing opportunities south of the border as the broader sentiment in the U.S. warms up to legalization.

In next month's U.S. midterm elections, Michigan and North Dakota will vote on ballot initiatives to legalize cannabis for adult use while Missouri and Utah will vote on medical pot.

And earlier this year, U.S. President Donald Trump signalled that he would "probably" support the bill amending the Controlled Substances Act, which could effectively make marijuana federally legal in states where recreational consumption is legal. The bill known as the STATES act has been referred to a Senate committee.

Meanwhile, companies such as Aurora Cannabis and Aphria Inc. have spun off U.S.-focused entities or divested U.S. assets, which allows them to remain compliant with listing requirements for stock exchanges in the U.S. and the Toronto Stock Exchange.

And next month, cannabis executives will be gathering in Las Vegas for the world's biggest conference for the industry, MJBizCon, which lists several Canadian companies among its speakers.

The risk for Canadian travellers in the cannabis industry is "overblown," said Nick Pateras, the vice president of strategy for Lift & Co.

"While they have the power, I don't think it's going to be as common an issue or as big an issue as people are worried about... We do no business in the U.S. and have no intention of stepping into that jurisdiction until it's federally legal," he said.

He said he does not intend to change his travel plans, and if need be, will claim his right to withdraw his application for entry.

However, if there are major U.S. entry issues for Canadian cannabis workers, that could be a "huge inhibitor" for Canada's industry, which has a competitive advantage at the moment, he said.

One executive at a Canadian cannabis grower, who did not want to be named due to the sensitivity of the topic, said the company has received legal guidance that there is no legal basis for barring individuals that operate law-abiding businesses in their respective jurisdictions. The company does not intend to change its U.S. travel plans, including attending the Las Vegas conference, but anticipates the border rules will be clarified over time, they added.

Another executive at a Canadian pot firm also intended to attend the conference and anticipates that U.S. border officials have "bigger fish to fry."

Still, there is an "unavoidable risk" for anyone travelling to the U.S. for business reasons, said David Wood, a lawyer with Borden Ladner Gervais, based in Calgary.

"Figure out how important your physical presence in the U.S. is and ask yourself whether that's enough to justify the risk," he said.

Border officials might not levy a ban and expedite removal of all travellers with a connection to cannabis, but mention of industry involvement could prompt other related questions involving consumption that could cause issues, said Scott Railton, an immigration lawyer at Cascadia Cross-Border Law in Bellingham, Wash.

One option to help mitigate that risk would be to send representatives who are U.S. citizens, who are always going to be admissible, he added.

Allan Rewak, the executive director of the Cannabis Council of Canada, said he has been invited to speak at some U.S. conferences but is waiting for legal guidance on whether he should attend.

He said the group, which represents licensed medical marijuana producers, recognizes that cannabis is illegal under U.S. federal law and the country has a right to establish restrictions. However, he said U.S. CBP's updated statement is an improvement and expects U.S. officials' approach to "evolve over time."

"This is a process and it will take some time to get there," Rewak said. "And we stand ready to work with our American partners to do that."