The legalization of cannabis in Canada may have diminished the need for criminal lawyers, but it’s created a booming business for the country’s most prestigious corporate law firms.

The cannabis sector has seen 27 major deals worth US$10.6 billion announced this year, according to data compiled by Bloomberg. Add in 127 stock sales worth US$2.65 billion, and advice to clients on how to navigate a complex new regulatory environment, and it’s been a boon for Toronto’s biggest law firms, many of whom had regarded it with trepidation for years.

“I’ve never seen an industry start to dominate our practice in the way that this one has,” said Patricia Olasker, partner at Davies Ward Phillips & Vineberg LLP. “It’s unprecedented in the lifetime of most practicing lawyers.”

Davies ranks first among its peers for working on US$5.8 billion worth of cannabis M&A this year, including advising Canopy Growth Corp. on Constellation Brands Inc.’s C$5 billion investment in the Smiths Falls, Ontario-based pot producer.

Like many of Canada’s corporate law firms, Davies entered the sector because its traditional clients needed to understand the implications of recreational legalization on Oct. 17.

“It’s not so much that we sat down one day and thought, we need a cannabis strategy, but rather that our clients were getting into this space and so they dragged us there,” Olasker said in a phone interview. “They’re lenders, they’re investment banks, they’re retailers and shareholder activists, so our work is coming from conventional sources but addressing this new industry.” 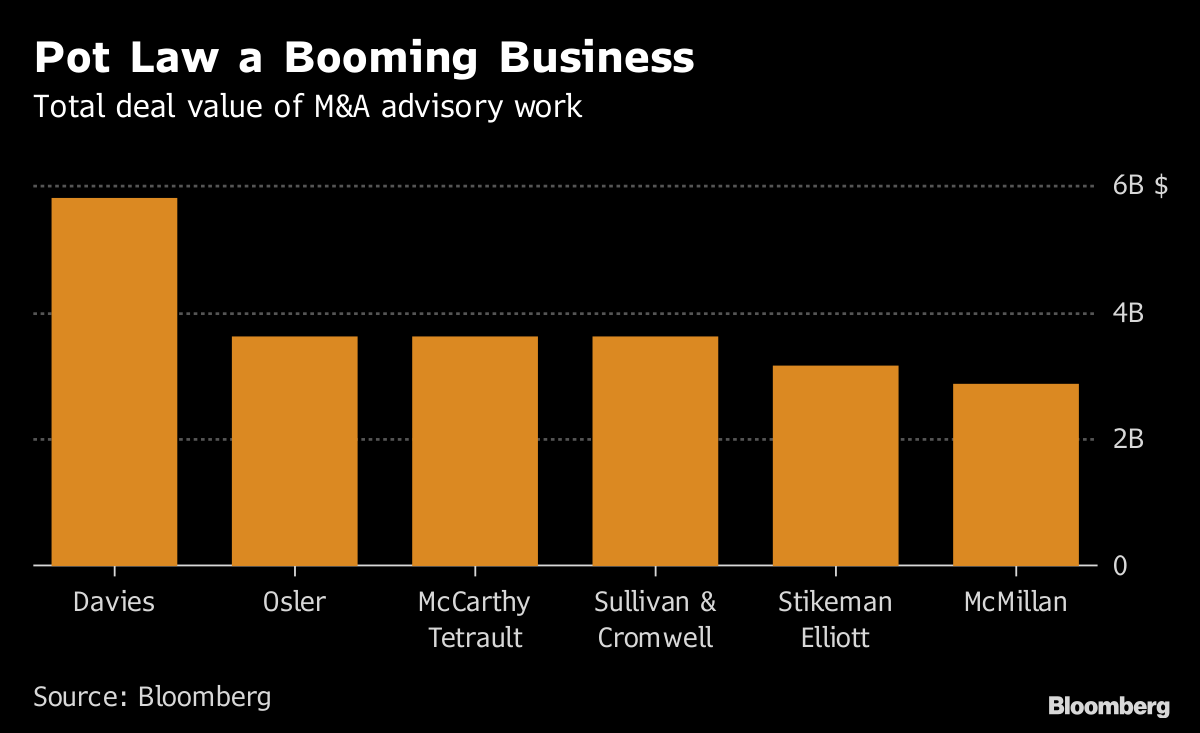 Davies started off early in the pot space and is now advising “a few of the more senior cannabis players” on tax law, branding, marketing and compliance. It’s also educating the next generation about cannabis law through a new course at York University’s law school taught by Olasker and her colleague Mindy Gilbert.

It was a similar story at Osler, Hoskin & Harcourt LLP, which advised Constellation Brands on the Canopy deal and was the bankers’ counsel for Tilray Inc.’s initial public offering, the first and so far only marijuana IPO on a major U.S. stock exchange.

That work came through Osler’s existing relationship with Constellation Brands and Cowen Inc., which acted as the sole U.S. book-running manager for Tilray’s IPO. Osler is tied for second place with McCarthy Tetrault and Sullivan & Cromwell LLP, advising on US$3.6 billion worth of deals this year, according to Bloomberg data.

“We’ve seen a number of very interesting opportunities presented to us because of our involvement in those high-profile transactions,” said Rob Lando, a partner at Osler with a focus on cross-border legal services.

Other law firms were more proactive about developing cannabis practices. McCarthy Tetrault started investigating the industry after Justin Trudeau, who had promised to legalize marijuana, was elected as Prime Minister in 2015.

McCarthy’s goal was to prepare its traditional clients like banks and retail landlords for the day they realized they were part of the sector too, said Awi Sinha and Matthew Kelleher, partners at the firm.

For example, “one of the largest retail landlords across the country” got a call from one of their security guards who asked what to do with someone who lit up a joint in a smoking area and had a prescription for medical cannabis. In response, McCarthy helped the firm develop rules for all their facilities across the country but also opened them up to the possibility of becoming a landlord for legal pot shops.

McCarthy has now turned its attention to preparing its clients for a growing global cannabis industry. It’s a member of the Saint John, New Brunswick-based Global Cannabis Partnership, which aims to create international standards for production, distribution and consumption of legal recreational marijuana.

McMillan LLP has done a lot of work for Aurora Cannabis Inc., which did the industry’s two biggest deals this year after Constellation’s Canopy investment. It also advised U.S.-focused pot firm iAnthus Capital Holdings Inc. on its Canadian stock listing.

James Munro, a Vancouver-based partner who co-founded the McMillan’s cannabis practice group in 2016, chides some of his competitors, who “dabble” in cannabis law but are reluctant to advertise it because of a lingering stigma.

“If you’re a mining company, you wouldn’t want a securities lawyer that does one-off mining agreements from time to time but really doesn’t understand the industry,” he said. “When these opportunities come, you need to jump in with both feet.”