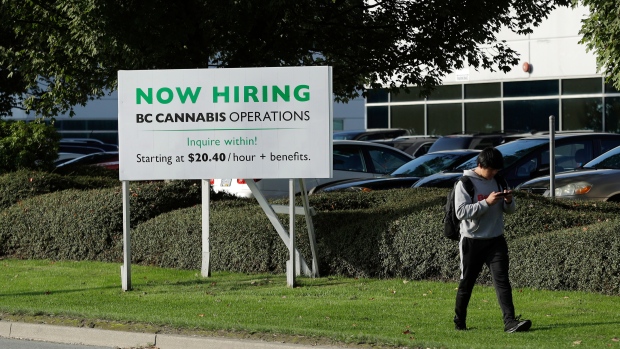 In this Sept. 26, 2018 photo, a pedestrian walks past a sign advertising jobs with BC Cannabis Operations in front of the warehouse in Richmond, British Columbia, that will store pot purchased from licensed producers before it is shipped to retail shops and online customers. , AP Photo/Ted S. Warren

Unlike many industries, the cannabis sector is still hiring during the pandemic. Yet the number of open positions has dwindled as layoffs become more common and many of the jobs that do exist are temporary.

Vangst, which runs the Gigs site for temporary pot jobs and recently launched a platform for full-time positions, is filling about 600 jobs a week. That’s a slight decrease from pre-COVID 19 levels earlier this year, mostly because companies are employing fewer in-store staff as they switch to delivery or curbside pickup. Meanwhile, the number of job candidates on the platform surged by 300% between March and April, according to Karson Humiston, founder and chief executive officer of Vangst.

“We’ve seen a huge uptick in candidates, and we’re seeing a large number of candidates coming from hospitality and retail,” Humiston said in a phone interview. “When our clients do pick up hiring again, they’re going to have access to a really strong talent pool.”

Of the temporary jobs that are being filled on Vangst’s Gigs platform, about half are replacements for employees who are unable to work and the other half are for normal seasonal work related to harvests or packaging, she said.

The cannabis sector employed 243,700 people at the beginning of 2020, up 15 per cent from the prior year and nearly double the number of jobs in 2017, according to data from cannabis information firm Leafly. However, that number has been shrinking as companies that grew too fast and are now dealing with pandemic-related disruptions cut back.

Canopy Growth Corp. said Wednesday that it’s cutting 200 jobs in Canada, the U.S. and the U.K., about five per cent of its total workforce. That’s on top of 500 positions that were eliminated in early March when it closed two facilities in British Columbia.

“When you have the largest cannabis company in the world laying off 700 people, that’s a signal of what’s going on in the broader market,” Humiston said. “We were already seeing that on the full-time side of our business and then Covid-19 came and exacerbated it.”

Not everyone is cutting back, however. Trulieve Cannabis Corp., one of the largest U.S. cannabis companies by market value, has hired around 250 people since the pandemic started and still has about 150 open positions.

The Florida-based company has doubled the number of vehicles in its delivery fleet and saw its call center volume spike from 25,000 calls a week to 65,000 as customers adapted to the new realities of pandemic shopping. It’s been hiring employees for both segments of the business, as well as for its dispensaries, said CEO Kim Rivers.

At first Trulieve was hiring to replace people who had to take time off, but “at this point it really is actual hiring, adding to the workforce,” Rivers said in a phone interview. Despite the pandemic, Trulieve opened a new dispensary in Titusville, Florida on April 18 and plans to open another one in the next week or so.

Rivers said it remains to be seen whether the pandemic-related expansion remains in place once things return to normal, but she’s hopeful Trulieve will be able to keep the employees it’s hired.

“We prefer to not lose folks who have experience within the company, and there may be other roles that folks could shift into as well because we are continuing to grow,” she said.