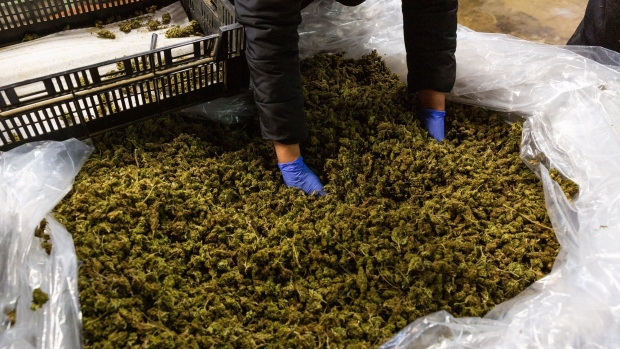 A worker gathers hemp flowers for processing at a New York farm. , Bloomberg

A little-known substance derived from hemp is flying off the shelves of U.S. gas stations and smoke shops, offering users a cheap and convenient high even in states where marijuana isn’t legal. But large cannabis producers are now pushing to clamp down on Delta-8 THC amid worries that a lack of oversight means heavy metals and unexpected intoxicants are cropping up in some of the products.

The cannabis compound has proliferated in gummies, joints and vape pens, with sales more than doubling in the past year across the country. Despite being almost chemically identical to federally outlawed forms of marijuana, Delta-8 has escaped widespread scrutiny thanks to ambiguity in U.S. laws.

That’s starting to change, with a coalition of cannabis producers now pushing federal and state regulators to block sales of unregulated Delta-8. More than a dozen states have already moved to restrict the products.

The previously unreported effort by industry leaders to rein in the booming but unchecked sector comes as chemists and health advocates sound alarms over potentially dangerous contaminants, such as lead and arsenic, and unpredictable potency levels in some commercially available products. Two tests of Delta-8 samples -- one by the U.S. Cannabis Council trade group and another commissioned by Bloomberg News -- found high levels of intoxicants in several of the products, as well as metals in some of them.

Delta-8 is particularly concerning to some scientists because it can be easy to make. Users can simply mix over-the-counter CBD with battery acid, pool chemicals or even household vinegar to produce it, although there are methods that don’t use acids.

Poison control centers are seeing an uptick in incidents related to Delta-8, and many health workers don’t know what the substance is or how best to treat patients suffering ill effects, said Christopher Holstege, director of the Blue Ridge Poison Center in Charlottesville, Virginia. “We’ve had at least 10 calls in the last couple of months, and a couple of people hospitalized.”

Some of the industry’s largest cannabis operators are worried that contaminated and dangerous items could torpedo an otherwise promising line of products, which some big-name companies already offer or are planning to introduce. On top of the health concerns, unregulated Delta-8 risks becoming a competitive threat to their existing offerings, sold in states they can’t get into, and it’s undercutting their prices by avoiding license fees, taxes and quality testing.

Regulators “should look to clamp down and stop this unregulated market,” said Steve Hawkins, interim chief executive officer of the U.S. Cannabis Council. The council has already consulted with state governments on Delta-8, he said, and it will step up efforts this week to encourage the U.S. Food and Drug Administration and the Drug Enforcement Administration to take action.

Boris Jordan, executive chairman of Curaleaf Holdings Inc., one of the industry’s biggest companies, compared the situation to the vape crisis from a couple years ago, when black-market products caused lung illnesses, souring regulators on even approved products.

“The states have got to get their hands around this,” he said.

Delta-8 tetrahydrocannabinol is a naturally occurring compound found in low levels in marijuana plants. The molecule is almost identical to that of Delta-9 THC -- commonly known as just “THC,” the main psychoactive compound in marijuana -- and some users say Delta-8 offers a more-relaxing, “THC-light” kind of high.

Delta-8 products are sold in gas stations and smoke shops across the country, falling in a gray area of U.S. law. Under the 2018 Farm Bill, hemp -- cannabis containing less than 0.3 per cent THC content -- can be transported and sold within the country. CBD, an increasingly popular cannabinoid extracted from hemp, is allowed as well, but there was little said about the dozens of other compounds that can be extracted, such as Delta-8.

Some companies and lawyers therefore argue Delta-8 is legal because it can be derived from CBD, which is made from hemp. Others say it depends on the interpretation of a DEA rule over “synthetically derived” cannabinoids, which are illegal.

Given the ambiguity, companies are taking a risk by selling the products, said Laura Bianchi, a partner at cannabis-focused law firm Bianchi & Brandt. Manufacturers “could face some enforcement action from the DEA or consequences from another agency such as the FDA.”

When asked about the products, the FDA referred questions to the DEA, which wouldn’t go into detail about Delta-8 because it said it’s currently in the rule-making process regarding how the Farm Bill has been implemented. “There is a lot to learn about the impacts of marijuana and its chemical constituents,” the agency said.

“Every single one of our clients has asked about it. It’s a hot topic,” said Kim Stuck, founder of Allay Consulting, which advises around 40 companies in the CBD or THC space. She said falling CBD prices and an overabundance of hemp in states like Oregon and Colorado have contributed to interest in Delta-8 production.

The lack of oversight in this relatively new market is raising concerns about what unexpected and potentially dangerous substances are ending up in commercially available products.

The U.S. Cannabis Council said it tested 16 Delta-8 products from vendors across the U.S. and found that all but one of them exceeded the allowable level of THC. On average, they had more than 10 times the legal limit. Seven of the samples also exceeded limits on metals such as copper, chromium or nickel.

“This represents a major consumer safety issue, posing dangers greater than the ‘vape crisis’ of 2019,” the group said in a report it plans to release this week, a copy of which was viewed by Bloomberg News.

The problem of contaminants typically traces to the manufacturing process. While larger companies tend to use above-board methods, Delta-8 can be extracted from CBD by mixing it with acid. The home-brewing methods, which have earned some Delta-8 a reputation as the bathtub gin of the cannabis world, can introduce toxins such as lead, according to Guido Verbeck, a professor at the University of North Texas who co-authored a study on methods of creating Delta-8. Even higher-quality acids can leave behind sulfate, nitrate or chlorine compounds that can be harmful over time, he said.

“It’s become almost too enticing for there not to be an issue,” said Thomas Kiselak, one of Verbeck’s co-authors. “All you need is a little battery acid or pool acid, which a teenager can go and buy. It’s something you can do in about an hour.”

Acid conversions also create unpredictable mixes of other compounds that exist naturally in marijuana plants, said Kiselak, now a technical specialist at Caldwell Intellectual Property Law. He estimated that around 11 of these so-called cannabinoids are created with battery acid.

Because scientists have only begun to study some of these rare cannabinoids and how they interact with the body’s endocannabinoid system, that can mean unpredictable effects on users.

Holstege, of the Blue Ridge Poison Center, said he worries about the impacts on children of products that are unexpectedly potent. He pointed to a recent case of a four-year-old who had to be hospitalized overnight after ingesting Delta-8 through gummies and becoming unresponsive.

“It’s a huge threat to youth across the country with these new drugs coming out,” he said.

Some companies do test for concentrations of Delta-9 THC to ensure they’re below federal limits, said Josh Wurzer, a founder of SC Labs. But he said clients that turn to him virtually never test for contaminants such as heavy metals because there aren’t regulations requiring it.

“People are taking CBD and doing chemical reactions and turning it into Delta-8 THC and selling that at gas stations and marketing it to kids,” he said. “There are people walking up and buying it who think it won’t get them high.”

More than a dozen states have placed restrictions on Delta-8 products in recent months, though the products can still be purchased in many areas. New York and Massachusetts recently said that Delta-8 products may not be sold or manufactured in those states.

Despite concerns over a lack of regulation, some of the industry’s largest operators are dabbling in the market -- and believe they can operate to higher standards. Curaleaf, for one, plans to introduce Delta-8 products even as it seeks tighter oversight of the products. Competitor Trulieve Cannabis Corp. already sells products. The company said its Delta-8 isn’t made using acid, but declined to describe its process, citing trade secrets.

DD8, a New York City-based company with 10 employees, recently announced the launch of a vaporizer for Delta-8. The founders say they use a heat-extraction process to make it, and a lawyer for the company said they don’t believe the method runs afoul of regulatory restrictions. The company plans to keep selling it. (Neither DD8’s nor Trulieve’s products were tested by Bloomberg.)

A shakeout in the Delta-8 market could be instructive as companies introduce new products based on other rare and little-understood cannabis compounds. One of them, Delta-10, has also been drawing similar attention to Delta-8, and was included in New York’s recent rule.

Hawkins, of the cannabis council, said it heightens the need for comprehensive regulation of cannabis plants. Without it, he said, “we’re just playing a game of whack-a-mole.”