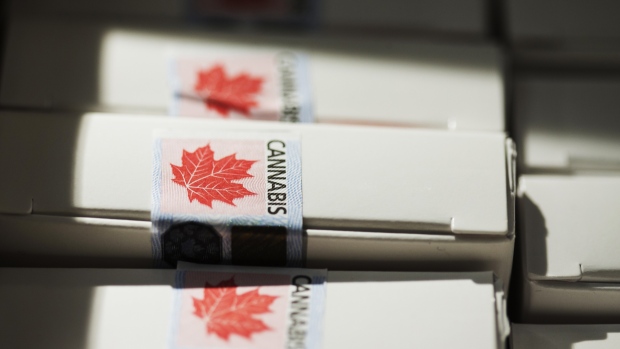 Boxes of pre-rolled joints sit stacked at a Quebec Cannabis Society (SQDC) store during a media preview event in Montreal, Quebec, Canada, on Tuesday, Oct. 16, 2018. The SQDC will have twelve stores open in Montreal, as cannabis becomes legal in Canada on October 17. , Bloomberg

“At 3:30 in the morning all of a sudden $4,000 worth of inventory is made available yet in seven minutes it’s drawn down, meaning that other big competitors are doing the same thing,” Mark Goliger, chief executive officer of Ottawa-based NAC, said in a phone interview Friday.

It’s evidence of the severity of the supply shortages that have plagued Canadian cannabis retailers since legalization on Oct. 17. Quebec’s government-controlled retailer has restricted its operating hours to four days a week, while Alberta has temporarily halted the issuance of new retail licenses due to lack of product.

This will affect NAC’s plans to have 50 stores open nationally by the end of the year and may result in “cash flow constraints” depending how long the ban lasts, Goliger said. NAC, which operates the Meta and NewLeaf banners, has 13 stores in Alberta and was aiming for 25 by the first quarter of 2019.

“We have employees that were set to open those stores, so we have HR costs, and then carrying costs of leases, where stores are going to be sitting dark although the construction is complete and they could be making revenue,” he said.

NAC has a joint venture with Second Cup Ltd., which is planning to convert two of its Alberta coffee shops into cannabis stores and has identified more than 20 locations in Ontario, where the government will start accepting retail applications in December. For now, marijuana sales in Canada’s most populous province are limited to a government-run website, with the first stores expected to open in April.

Ontario has restricted licensed producers and their affiliates to just one store each, but NAC is not a licensed producer so it’s free to open as many as 75, the cap for individual retailers. Goliger said NAC plans to hit the 75-store threshold but isn’t sure yet what the breakdown will be between Second Cup locations and new locations.

Shares in NAC have dropped almost 50 per cent from a peak in July, giving it a market value of about $107 million.