The country’s largest cannabis retailer – National Access Cannabis Co. (META.V) - was among the many companies shut out on Friday and its CEO viewed the lottery as a flawed process.

“Taking 25 would-be, hopeful retailers, bringing them in and hoping that they’re going to be successful? That’s very low probability,” said Mark Goliger, the company’s CEO, in an interview with BNN Bloomberg on Monday.

“In fact when you look at it, almost two-thirds of the applicants were sole proprietors,” he added. “That just shows to me in a controlled-substance retail environment that these were people that were strictly buying a lottery ticket.”

NAC, which operates seven cannabis stores in Manitoba under its Meta brand and 14 in NewLeaf-branded locations in Alberta, landed between 10,000th and 13,000th-place on the waiting list for a licence in Friday’s lottery, according to Goliger.

Goliger said that Manitoba’s process – which picked four retailers for licences based on requests for approval – better equipped the province for a successful retail environment.

“They picked four who were successful applicants out of hundreds, based on the merit of their proposal and their ability to actually execute,” he said. “I think that that would have been a logical first step and then [to] open it up much broader… but we don’t have a time machine.” 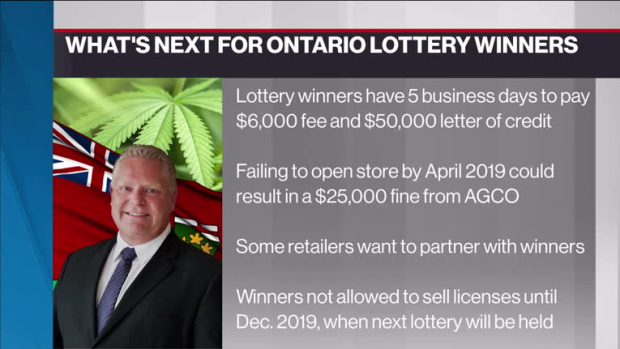 One retailer looking to get into cannabis sales is the iconic Friendly Stranger cannabis culture shop in downtown Toronto, which has been selling accessories and paraphernalia since 1994.

The company aims to expand its footprint and has recently purchased a company called Happy Dayz, which operates nine retail locations specializing in pipes, vaporizers and other cannabis accessories in the Greater Toronto Area.

Although Friendly Stranger was also unsuccessful in the lottery, James Jesty, the retailer’s president, said that the process has helped settle some of the retail speculation in the province.

“It settled everything down a little bit,” Jesty told BNN Bloomberg on Monday. “The real estate piece of the business was going a bit crazy leading up to when the Ontario government sort of re-set and now we can look for proper sites and I think everybody else is in the same situation.”

Goliger and Jesty expressed optimism that licences may become easier to come by once Ontario is able to eradicate its cannabis supply backlog, which the executives estimated should happen by mid-2019.

“I would say, before April we will see a massive tipping point from the famine point,” Goliger said. “Not so much to the feast point, but we will get closer to equilibrium around there.”

“We know that the capacity is coming online, and hopefully Health Canada can move the pace a little bit faster to bring more medium-sized producers on, as well.”