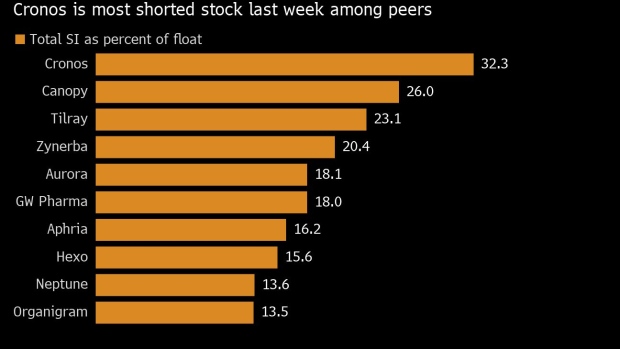 (Bloomberg) -- The potential for a short squeeze in the cannabis sector has been “drastically reduced” even as short interest has risen from this year’s lows, according to financial analytics firm S3 Partners.

Lower borrow fees and year-to-date profits for those who bet against the most-shorted stocks have reduced chances for a potential squeeze on the sector, Ihor Dusaniwsky, managing director of predictive analytics at S3, wrote in a report. A short squeeze happens when a stock rallies, forcing traders who bet against it to buy in order to prevent further losses, which pushes the stock even higher.

The average stock borrowing fee for the pot sector fell to 11% last week from 30% on Jan. 1. Meanwhile, short selling activity has increased since March, but is lower year-to-date, according to S3 data. Cannabis stocks are down about 25% since the beginning of the year but up 75% from their March lows.

The main reason borrowing fees are falling is because “the lending pool has been restocked,” Dusaniwsky said in an email to Bloomberg. With more investors going long cannabis shares, there’s more supply for shorts to borrow, he said.

The biggest drop in borrow fees over the past month was in industry giant Canopy Growth Corp., which fell “from a trade killing 51.9% fee to a more palatable 9.23% fee,” S3 said.

Lower borrow fees have made short positions in cannabis stocks more lucrative, according to S3. “Shorts are now keeping more of their profits and paying less to their prime brokers,” Dusaniwsky wrote.

The short interest value of all the pot stocks in the sector was $2.6 billion as of last week, which is down by $876 million year-to-date but up by $112 million within the last 30 days.

Cronos Group Inc. was the most shorted among the pot stocks, with short interest of 32%. That was followed by Canopy with 26% and Tilray Inc. with 23%.