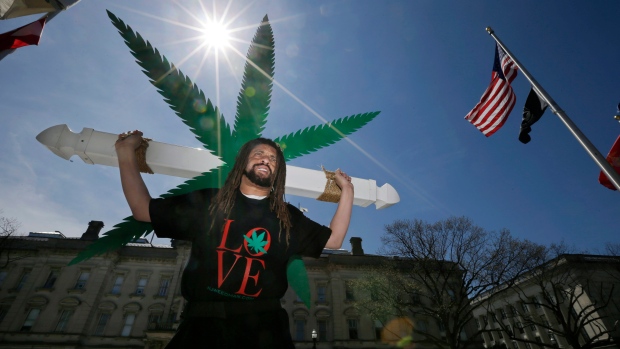 Ed Forchion, a pro-marijuana activist known as NJ Weedman, carries a large cross with huge likeness of a marijuana leaf as he walks in front of the New Jersey Statehouse in Trenton, N.J., Sunday, April 20, 2014. , The Associated Press

(Bloomberg) -- The guy who calls himself NJ Weedman was angry -- that is, as angry as one can be with a lungful of marijuana smoke -- as he condemned New Jersey’s latest attempt to legalize adult recreational use via ballot.

“They’re going to steal our culture, steal our market and give it to the rich guys,” the activist, born Ed Forchion, said Monday outside the Trenton statehouse, where he was sharing a joint as he prepared to lead a protest march with about a dozen supporters.

Forchion, 55, who lost legal bids in California and New Jersey to change his name to NJWeedman.com, makes no secret of his drug-arrest history. He says he sells pot illegally at NJ Weedman’s Joint, his restaurant across the street from Trenton City Hall.

On Nov. 18, New Jersey lawmakers said they will drop their quest to pass a bill to legalize pot sales and use, after almost two years without enough votes to pass. Instead, they will seek voters approval on the 2020 ballot.

If the measure passes, Forchion said, he fears a reprisal of proposed regulations from earlier legislation: limiting operations to corporate-backed interests with millions of dollars to spend on applications and security, and no felony convictions.

A friend, Anthony Rico, said he expects enforcement to increase if sales come under corporate control.

“We know our market, and they’ll restrict us so much that we can do nothing for the regular street buyers,” said Rico, a 53-year-old cook from Woodbridge.

Eleven states have legalized adult-use recreational marijuana even as it remains federally outlawed. Governor Phil Murphy had intended to legalize within 100 days of coming to office in January 2018, but legislation was blocked by Republicans and some fellow Democrats.

To contact the editors responsible for this story: Flynn McRoberts at fmcroberts1@bloomberg.net, Stacie Sherman