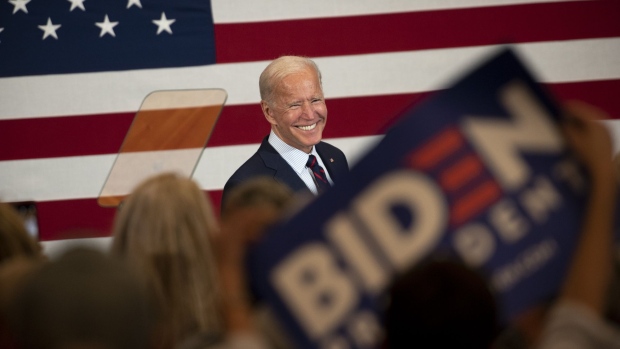 Marijuana stocks took another leg down on Monday, after the Washington Post reported that former vice president Joe Biden said that weed may be a “gateway drug” that can lead users to harsher substances, a sign one of the leading democratic challengers to President Trump may be at odds with much of his party when it comes to pot.

Biden’s comments come at an awkward time, two days before the House Judiciary Committee markup of H.R. 3884, which would decriminalize marijuana at the federal level and reassess pot convictions.

Cowen’s policy analyst Jaret Seiberg thinks the timing of the markup seems odd as it will be overshadowed by impeachment proceedings and the Thanksgiving recess. “This may be a wasted chance to pressure the Senate on the SAFE Banking Act,” he wrote.

The SAFE Banking Act bill would , if enacted, expand the ability of banks to provide financial services to cannabis businesses and service providers and grant a safe harbor to U.S. entities serving the hemp industry.

The House committee’s decision earlier Monday announcing a markup of the Marijuana Opportunity Reinvestment and Expungement (MORE) Act was was lauded by one of its strongest supporters. “This will be one of the most historic events in our movement,” said Congressman Earl Blumenauer (D-Ore.), the founder and co-chair of the Congressional Cannabis Caucus.

Jefferies analyst Owen Bennett added that the legislation, sponsored by House Judiciary Committee Chairman Jerrold Nadler, would remove cannabis from the Controlled Substances Act. Meanwhile, the MORE Act would also provide for re-sentencing and expungement of records for people previously convicted of cannabis offenses. He noted that it currently has 55 cosponsors, all but one of whom are Democrats.

Seiberg thinks the vote will be a disappointment from “tactical point of view.” However, it’s not all doom and gloom, as “it shows how much views on Capitol Hill have changed on cannabis and supports our argument that federal legalization is inevitable,” he added.