Betting against pot, as companies overspent on production: Strategist

As investors piled into cannabis stocks this week, Canadian pot producer Canopy Growth Corp. got left in the dust.

Markets rallied amid optimism that global economies may be able avoid a recession even as interest rates rise, putting the S&P/TSX Composite Index on pace to post its best week since late May. But the boost in risk sentiment wasn’t enough to lift Canopy out of its self-inflicted trough.

Its shares sank 7.4 per cent this week, compared with a more than 2 per cent rally in the 42-member ETFMG Alternative Harvest ETF. Among the standouts: Canadian pot giant Tilray Brands Inc. up 10 per cent, its second best week since March. US multi-state operators Green Thumb Industries Inc. and Trulieve Cannabis Corp. surged 16 per cent and 3.5 per cent, respectively, as hopes re-emerged that lawmakers would move forward on incremental legislation before the midterms. 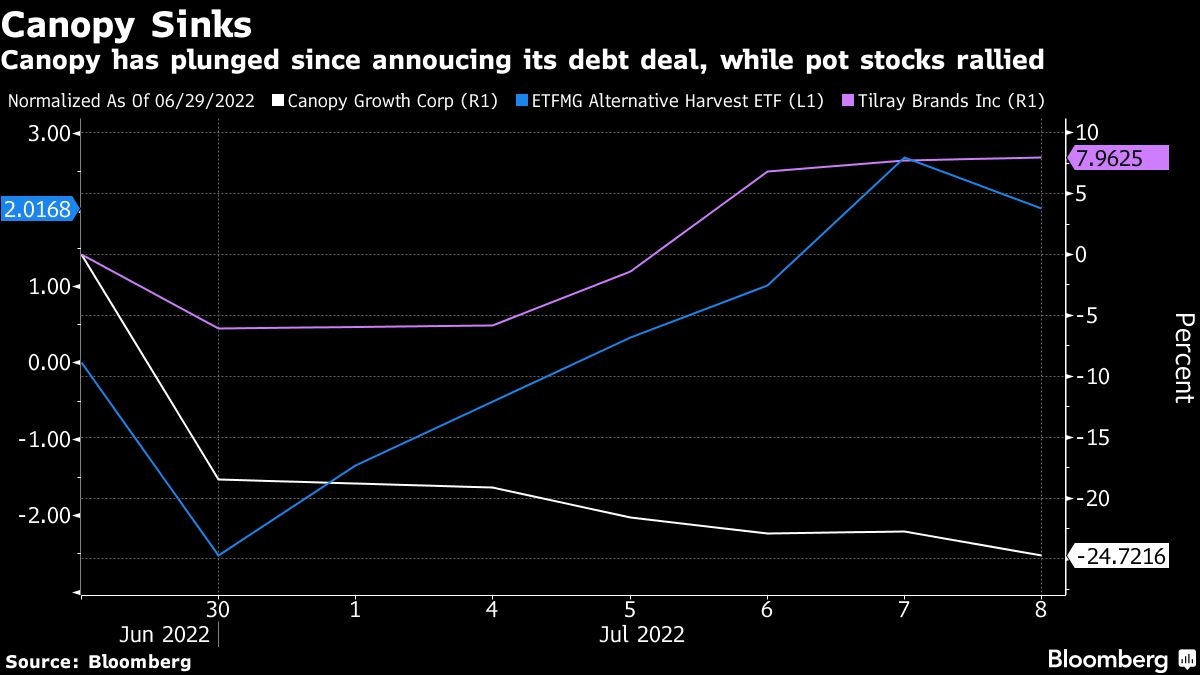 Sentiment toward Canopy deteriorated materially after the company said it inked a deal to exchange debt for a mix of shares and cash, triggering an 18 per cent drop in the stock on June 30. The plan includes swapping $255.4 million of debt for shares and $3 million in cash for accrued and unpaid interest also boosting its main shareholder Constellation Brands Inc.’s stake.

It came at a “great cost to shareholders” since the deal dilutes Canopy’s share count by as much as 20 per cent, Canaccord Genuity analyst Matt Bottomley said in an interview.

“The higher the dilution is, the more investors get spooked or think that it’s not the right time to be holding the stock,” said Bottomley, who cut his price target on the stock to $3.50 from $4.50. “Given where share prices are, there’s a risk that the fully diluted share count will continue to increase materially until all of that debt is either paid off or converted.”

Analysts and debt agencies have turned increasingly pessimistic on the company. In addition to Canaccord, at least four other brokerages have sliced price targets since the end of June, with Cantor Fitzgerald and CIBC Capital Markets slashing projections by nearly half.

Meanwhile Fitch Ratings downgraded Canopy to ‘C’ on Tuesday, citing a distressed debt exchange, in its second rating cut in the span of a little more than a week. On Wednesday, S&P Global Ratings added to the chorus of bearish voices in lowering its rating to selective default (SD from CCC), noting the swap constituted “a distressed exchange and tantamount to a default because we believe that the noteholders could receive less value than promised when the original debt was issued.”

Pot stocks often trade inline with tech shares and risk sentiment more broadly, which has faced headwinds from fears that central bank attempts to contain hike rates to contain accelerating will tip economies into recession. Moreover, pot stocks have been buffeted by the slow pace of progress to open up the US market.

But whereas the ETFMG Alternative Harvest ETF has lost 46 per cent this year, Canopy Growth has tumbled 69 per cent, with its average price target sinking by almost two-thirds and the number of analysts with sell ratings jumping to 11, outweighing buy and hold recommendations combined.