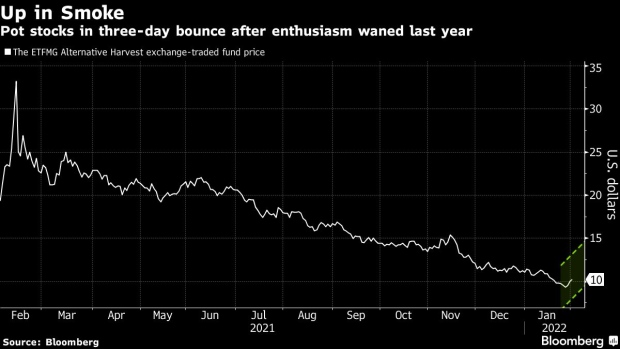 (Bloomberg) -- After falling out of favor, pot stocks including Canopy Growth Corp. and Tilray Brands Inc. are rebounding in a risk-on rally, with the renewed push to get cannabis legislation passed further helping fuel the rally.

Canopy, which sells Martha Stewart-branded CBD gummies, has climbed more than 24% over the past three sessions while Tilray advanced roughly 18%. Investors are weighing prospects for legislation known as the Secure and Fair Enforcement, or SAFE, Banking Act that would make it easier for cannabis companies to do business as a Colorado representative pledged to renew efforts to get approval before his retirement.

The advance comes after a tough year for pot stocks -- Tilray and Canopy are still down more than 80% from last year’s highs -- as the prospects of U.S. federal legislation for cannabis dimmed. The ETFMG Alternative Harvest ETF, or MJ, is down nearly 70% from its peak as sector sentiment cooled.

But Ed Perlmutter, a Democratic representative from Colorado, may be stoking the flames once more. He has vowed to attach an act to protect financial services provided to cannabis businesses to another bill dubbed the America Competes Act. The House is expected to vote on the bill this week.

The SAFE Act has passed the house five times only to stall in the Senate. The act is unlikely to make it through in the current legislation targeting competition with China, according to Cowen analyst Jaret Seiberg, though Perlmutter has promised to attach it to every bill that passes his desk before his retirement. Senate Majority Leader Chuck Schumer is also likely to oppose the act as he pushes for more comprehensive legislation, the analyst said.

“This push still matters,” Sieberg wrote in a note to clients. “It adds pressure to act on SAFE. It is why we still see a path forward for a broader SAFE ACT in second half 2022.”