Senate Democrats plan to introduce a bill to decriminalize marijuana at the federal level next week, a person familiar with the matter said, although the legislation faces long odds in the evenly divided chamber.

Majority Leader Chuck Schumer worked with Senators Cory Booker of New Jersey and Ron Wyden of Oregon on the measure. The senators circulated a draft of the bill last year and made tweaks after feedback from Senate committees.

The Cannabis Administration and Opportunity Act would remove marijuana from the list of drugs covered by the Controlled Substances Act. States, however, can still maintain and create prohibitions on production and distribution of marijuana. 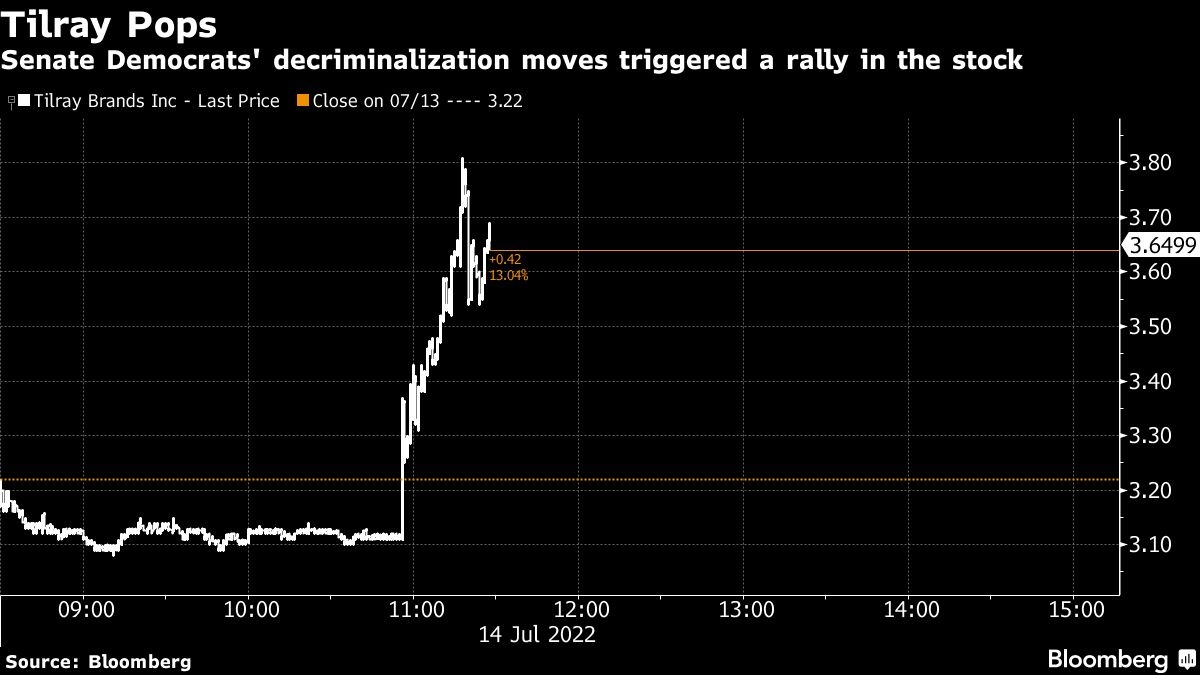 Pot stocks surged on the news. Canadian cannabis producer Tilray Brands Inc. soared as much as 20 per cent in its biggest jump in four months. Investors surged into other Canadian licensed producers that have been expanding into the US market, including Canopy Growth which surged as much as 11 per cent. US multi-state operators also rallied, with Green Thumb Industries climbing to its highest point in one month.

The sector has been pummeled this year as the glacial pace of US legalization weighs on formerly high-flying share prices. The ETFMG Alternative Harvest ETF, also known by the ticker MJ, has plunged 48 per cent this year as investor hopes wane.

The legislation faces an uphill battle in the chamber where 60 votes are required to pass most bills. Many Republicans and some Democrats, including Senators Jeanne Shaheen and Jon Tester, have opposed decriminalizing marijuana.

The bill would create grant programs to aid communities and individuals impacted most by drug offenses and establish funding programs to provide loans to small cannabis businesses owned by disadvantaged individuals.

It also requires that federal non-violent cannabis related convictions and arrests be expunged within one year of enactment.

The House voted in April to decriminalize marijuana, expunge federal convictions on pot-related charges and impose taxes on cannabis producers and importers.

The legislation passed 220-204 with support from most House Democrats and three Republicans. Two Democrats voted against the bill.