Cannabis stocks suffered their worst week since the start of the pandemic as the glacial pace of federal legalization efforts in the U.S. sowed more doubts it will happen anytime soon.

The largest fund tracking the pot industry, the ETFMG Alternative Harvest ETF (ticker MJ), fell to a one-year low. The ETF is down 60 per cent from its high in February. Only three of the fund’s 36 holdings rose this week. Canopy Growth Corp. dropped 20 per cent in the last five days, Cronos Group Inc. sank 21 per cent and Tilray Inc. declined 15 per cent.

While the ETFMG ETF is dominated by Canadian cannabis companies, U.S. pot stocks are lagging as well. The Horizons US Marijuana Index ETF (ticker HMUS) dropped 12 per cent this week. The fund is down 54 per cent since its 52-week high on Feb. 10. 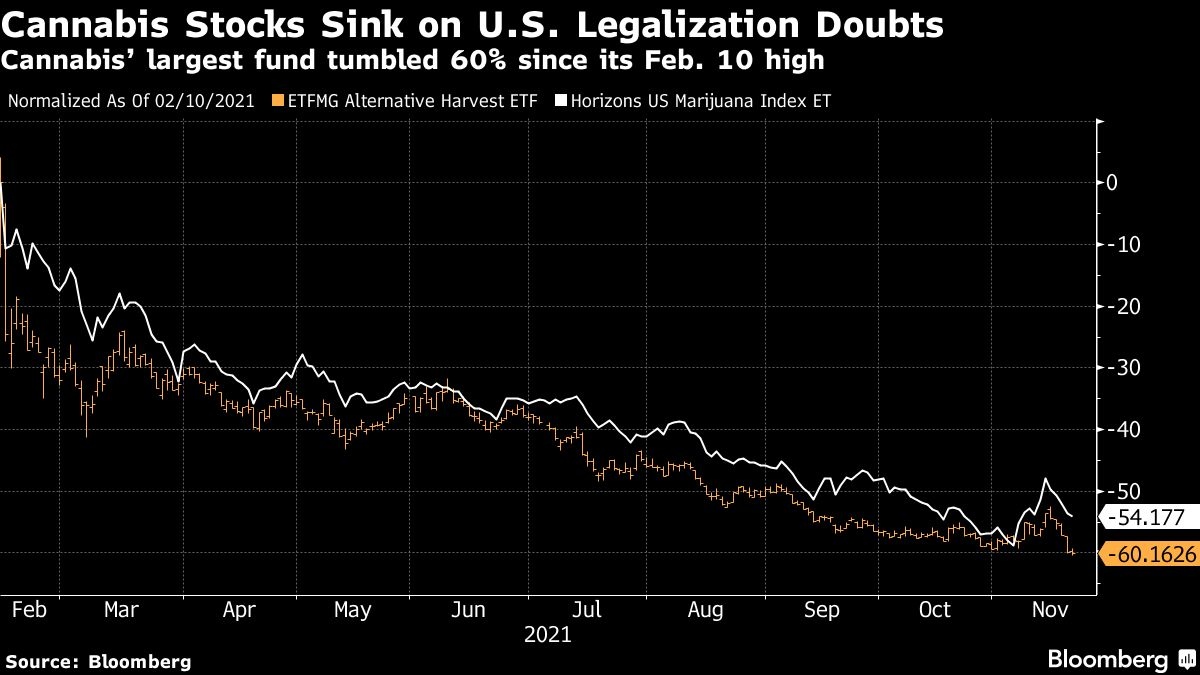 The global cannabis market’s growth hinges on legalization in the U.S. But that kind of regulatory change is unlikely to happen under the Biden administration, Barclays analysts wrote in a note to clients on Thursday. In addition, Canadian cannabis companies will struggle to compete with U.S. multistate operators, Barclays wrote.

On Monday, Republican Congresswoman Nancy Mace released draft legislation for a cannabis bill. But the bill is unlikely to become law in a Democratically controlled House, Cowen analyst Jaret Seiberg wrote in a note.

With waning buzz around the bill, investors are pulling back from pot stocks. Even though Mace’s bill may fall short, there is still a “narrow” opportunity for legalization to make some progress after the U.S. midterm elections, according to Azer. But investors should avoid jumping into pot based on the ebbs and flows of drawn-out legislative timelines that could continue to weigh on the sector heading into next year, she said.

“It’s the natural unwinding of irrational retail investor exuberance around regulatory headlines out of Washington D.C.,” Azer said in an interview. “We’ve been clear in saying that that piece of legislation is not going to see the light of day.”