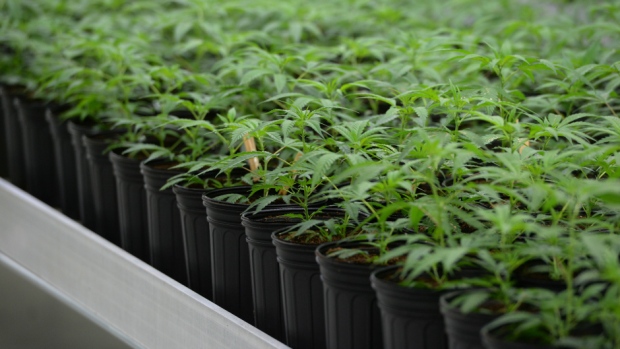 The federal government is limiting the amount of medical cannabis that veterans will be reimbursed for to three grams a day. The announcement contributed to another day of dramatic moves for Canada's pot stocks, which have been on a wild ride recently — including one trading session last week that saw multiple trading halts triggered by circuit breakers.

Veterans Affairs Minister Kent Hehr says the cost of reimbursing veterans has increased with many using up to 10 grams a day.

The new limit announced Tuesday at a military and veterans health research forum in Vancouver is for dried cannabis or the equivalent of oil and fresh marijuana.

The number of veterans who were being reimbursed for medical cannabis rose to more than 3,000 in eight years. Hehr said he was surprised the former Conservative government began paying for it with no policy in place.

Three grams a day is the upper limit of use in guidelines from the college of physicians, Hehr said.

Under the new policy, veterans who are already claiming for more than three grams per day of dried marijuana will continue to be reimbursed at that level until May 21.

Veterans whose health practitioner authorizes more than three grams a day of dried marijuana or its equivalent can apply for an exception to the policy, which also fixes the rate of reimbursement to a maximum of $8.50 per gram.

"While the limits were stricter than expected, we don’t see the changes having a material impact on licensed producers in the long term, unless their long-term strategy was medical-only and targeting veterans," said M Partners Research Analyst Mason Brown in a report to clients.

Canopy Growth Corporation (CGC.TO), whose stock tumbled 21.3 per cent on Tuesday, noted in a statement that veterans account for two per cent of its client base, and said it doesn't expect the new policy will have a "material impact" on sales or customer growth.

"With cost overruns and allegations of unethical price inflation, it was possible that the government could have ended all insurance coverage, so we are pleased that Veterans Affairs will continue to offer our veterans access to this emerging therapeutic option, and that coverage has been extended to oils as well," said Canopy CEO Bruce Linton in a statement.

According to Brown at M Partners, Aphria Inc. (APH.V) and OrganiGram Holdings Inc. (OGI.V) have "sizeable" exposure to veterans; their shares closed down 19.6 and 17.8 per cent, respectively.

Veterans Affairs says the new daily limit is consistent with the amount of medical cannabis used by average Canadians, which Health Canada indicates is an authorized amount of 2.6 grams per day.

Israel and the Netherlands have also done research on marijuana for medical purposes. Israel's average use of cannabis is 1.5 grams per day, while in the Netherlands it is 0.68 grams.

Hehr said Veterans Affairs and the Canadian Armed Forces are also launching a study on the medical effects of cannabis, adding that scientific research is inconclusive.

"The safety and well-being of our veterans was the fundamental consideration in the development of this reimbursement policy," he said.

With files from BNN.