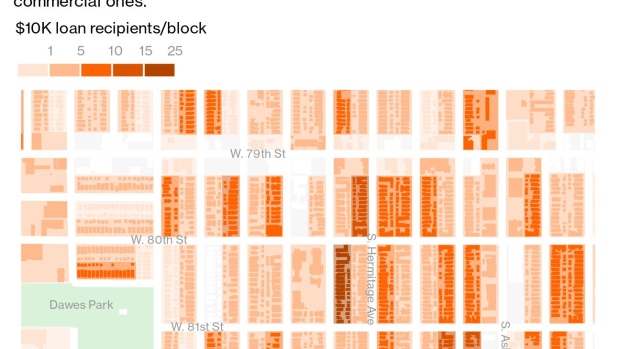 (Bloomberg) -- On a block of South Hermitage Avenue on Chicago’s South Side, rows of crenelated brick apartment buildings stand behind low iron fences and tidy lawns. It’s a residential street like thousands of others across the country, home to nurses, computer techs, hairdressers and retirees.

But if records from the Small Business Administration are to be believed, this block is also a bustling commercial hub. One man claims to employ at least 10 people in his apartment on one floor of a two-flat. Next door, an occupant of a handsome three-story with limestone quoins does the same. Ditto for a couple of her neighbors across the street. In all, the block, lacking so much as a single storefront or neon sign, contains 18 businesses employing at least 10 people each, according to the SBA. In June and July, all 18 were approved for $10,000 pandemic-relief grants. Some didn’t respond to messages seeking comment, and the rest couldn’t be reached.The payouts on South Hermitage reveal the pervasiveness of fraud in the $214 billion Economic Injury Disaster Loan program, meant to help businesses hurt by Covid-19. In hundreds of neighborhoods in Chicago and across the country, the records show government aid flowing to statistically impossible numbers of small businesses, many of which appear on closer inspection to be fictional.

The most obvious red flags are clusters of $10,000 grants, which were intended for businesses with 10 or more people on payroll. On Chicago’s South Side, they are everywhere. In suburban San Antonio, grants that size went to 21 people who claimed to have businesses at the same ranch-style house. Eleven workers at a Las Vegas strip club got $10,000. So did three fighters and a trainer at a boxing gym in Ohio. At the fire department in Mount Vernon, just north of New York City, at least 11 members were approved for $10,000 grants, including five holding a rank of lieutenant or higher.

Thousands more grants and loans went to self-described farmers operating in densely populated cities, including more than $150,000 approved for a pair of poultry farms in apartment 13D of a swanky high-rise in Manhattan’s Greenwich Village. Hundreds more went to Uber Technologies Inc. and Lyft Inc. drivers who got extra money by falsely claiming to have employees of their own.

The revelations come after a federal judge in Washington ordered the SBA to release data this month in response to a lawsuit brought by Bloomberg News and other media organizations under the Freedom of Information Act. SBA Administrator Jovita Carranza has defended the agency’s performance during the pandemic and has said that repeated fraud warnings by its inspector general were overblown. “SBA takes seriously its stewardship of taxpayer dollars and has designed a robust loan review process to ensure that only eligible borrowers received loans that fully complied with program requirements,” the agency said in a statement responding to a summary of Bloomberg’s findings.

The disaster-aid program has distributed about $194 billion in low-interest loans to 3.6 million small businesses across the country, as well as $20 billion in 5.8 million grants of as much as $10,000 that don’t have to be repaid. It’s separate from the $525 billion Paycheck Protection Program, which offered forgivable loans through private lenders. Congress this week approved a new round of pandemic aid that would revive the PPP and provide an additional $20 billion for disaster grants, which ran out of funding in July.

The new legislation allows the SBA to ask for tax records from grant applicants. Previously, Congress had limited the agency’s authority to request such records, making it difficult to detect phony businesses.

The SBA’s inspector general, Hannibal “Mike” Ware, warned of “potentially rampant fraud” in the program in July. Bloomberg News subsequently reported how applying for phony grants went viral in some neighborhoods over the summer, how foreign scammers plundered loans using fake IDs and how even someone posing as President Donald Trump made off with $5,000. Bloomberg also reported on a family that created dozens of fake farming companies in the Cleveland suburbs and collected more than $7 million in loans.

The newly released records solve a mystery that has clouded the SBA program for months. Across the country, the number of $10,000 grants approved is equal to about two-thirds of small businesses with 10 or more employees, according to the most recent Census data available. But in some congressional districts around Chicago, Atlanta, Miami, Houston and elsewhere, $10,000 grants far outnumbered eligible businesses. Nationwide, the excess was about 133,000 grants, worth $1.3 billion in all.

In ZIP code 60620, which encompasses the South Hermitage block in the Auburn-Gresham neighborhood of Chicago, Census data show at most 156 establishments big enough to qualify for the largest SBA grant. But the agency sent 3,824 grants of $10,000 there, suggesting that the vast majority of payments involved fraud. The newly disclosed records provide the names and addresses of all aid recipients and show that most applicants in 60620 didn’t provide evidence of a corporate registration or even a business name—they used nothing more than an individual’s name and a residential address.

Many grant recipients identify themselves on social media as wage-earners, not small-business owners. Frequently, two or three $10,000 checks went to different people living in the same apartment unit or single-family home. A few blocks west of South Hermitage, one bungalow near Dawes Park got six. Then there were the two dozen “farms” scattered across the neighborhood operating out of single-family homes, apartment buildings and a narrow lot containing only a billboard.

The only parts of the neighborhood that weren’t showered with $10,000 grants were the ones that should have been: the commercial strips with nail salons, smartphone stores and clothing shops. Many of these businesses don’t show up on the list of recipients, including the Four Seasons Barber Shop, not far from the South Hermitage block. Around noon one day last week, a row of styling chairs was empty save for a couple of hairdressers waiting for a customer. “Right now, we’re trying to get by,” a barber said through a black face mask.

One clue about the magnitude of fraud comes from the SBA’s handling of gig workers. The agency allowed businesses grants of $1,000 for each worker, up to the maximum $10,000. As a rule, drivers for companies such as Uber are self-employed independent contractors, eligible for only $1,000. But Bloomberg identified 217 drivers for Uber, Lyft and Amazon Flex who got $10,000 grants.

About 3% of the more than 21,000 grant recipients who identified themselves as drivers for those companies or listed their corporate addresses received more than $1,000, indicating they claimed on the application to have employees of their own. The result is that about 11% of the grant money was spent on inflated employee counts. If that fraud rate held across the entire program, more than $2 billion of the $20 billion in grants would be in doubt.

Another clue comes from grants and loans to businesses that described themselves as farms. Agricultural producers had an advantage in the application process because they were eligible during May and early June when applications were closed to most others. The records reveal thousands of unincorporated “farms” in dense urban areas, from Brooklyn to Chicago to San Francisco. Hundreds of these claimed to have 10 employees, or used an address in a multi-unit apartment building or both.

The two poultry farms in Greenwich Village appear to be the invention of a scammer who stole the identity of the apartment’s residents, a church treasurer and his wife. Informed by Bloomberg News of the loan approvals, the treasurer contacted the SBA and was told the money was never paid out because of a problem with a bank account. “Would it be too much to ask for the government to figure out it shouldn't be making loans to poultry farmers in New York City?” said the treasurer, who asked not to be named because he didn’t want to embarrass his church. “How hard is that to screen?”

The SBA’s controls also missed strip-club workers in Las Vegas who claimed to run their own 10-employee businesses and collected grants despite a prohibition on aid for “live performances of a prurient sexual nature.” Bloomberg identified 21 strip-club employees there who got maximum-size grants, including 11 at Sophia’s Gentlemen’s Club, a topless joint calling itself the city’s No. 1 luxury strip club. The recipients didn’t make much of an effort to hide their occupation, often using the address of their workplace and describing their businesses as “adult party planning.”

The $10,000 payout was a lifeline for a stripper who couldn’t find work after Larry Flynt’s Hustler Club in Las Vegas shut down. One of at least seven people who worked at the club who got grants that size, he said he didn’t think he did anything wrong and doesn’t remember claiming he had 10 employees. “I wasn’t able to get unemployment because I was working for cash,” he said. For the past few months, he’s been trying to make ends meet by posing for photos with tourists in exchange for tips. “As a dancer, you’re in front of people more than other jobs,” he said. “There’s no money to be made right now. People are scared.” Calls and emails to Flynt’s and Sophia’s went unanswered.

The city of Mount Vernon opened an investigation after media reports that large numbers of municipal employees were improperly collecting small-business relief. The city later said at least 17 had received SBA aid and that it was cooperating with the Federal Bureau of Investigation. Bloomberg News matched the names of more than two dozen local recipients of $10,000 grants against a database of municipal employees, including the 11 in the fire department.Mayor Shawyn Patterson-Howard said in an interview that some workers have legitimate side businesses and that others may have been duped into accepting payments without being aware anything was improper. A spokeswoman for the FBI in New York declined to comment.

The Department of Justice has announced 37 prosecutions for disaster-aid fraud around the country, but in most cases the defendants were also being charged with other, more serious crimes. The SBA says it has referred more than 80,000 loans for possible criminal investigation.

Many of the places where disaster-aid fraud was most common are, like Auburn-Gresham, relatively low-income neighborhoods disproportionately clobbered by the pandemic and the economic slowdown. In Auburn-Gresham’s case, looting and vandalism that followed the killing of George Floyd took a further toll. The SBA aid, however improperly obtained, may have provided a lifeline.

It’s impossible to know how much of the money went to the named recipients, as opposed to identity thieves in other states or foreign countries. It’s also unclear how much went to middlemen who offered to submit SBA applications in exchange for a cut of the profits. And there’s no way to tell how many legitimate local businesses were denied grants because fraudsters helped exhaust the $20 billion pool of funding.

For many who live in the neighborhood, the pandemic made a “bad situation worse,” said Rev. Michael Pfleger, senior pastor at Saint Sabina Church, whose food pantry is facing unprecedented demand this year. “When people are desperate, they do desperate things,” he said. “I’m not justifying that, but I understand. There are some that are just scammers,” he added, but “there’s another whole group that’s saying ‘I’m hurting, I don’t know what to do, and if I find a way to get money from the government I’m going to do it.’”David Moore, an alderman who represents part of Auburn-Gresham on the city council, said the government bears much of the blame. He said many aid recipients may not have understood how the program worked or assumed someone would verify their eligibility. The thought process, he said, was “‘If I don’t qualify, I’m not going to get it. But I got it, so I must’ve qualified.’ The onus is on the administration.”