U.S. producer prices for processed poultry jumped to an all-time high in May, climbing 2.1 per cent in the eighth straight monthly increase, U.S. government data showed Tuesday. Gains in poultry outpaced the 0.8 per cent increase in the broader producer price index.

The surge comes after several large fast-food restaurant chains recently launched fried-chicken sandwiches in a bid to match Popeyes’ 2019 viral success. Sales have also surged with consumers preparing more meals at home during the pandemic. Meanwhile, poultry producers have struggled to keep up with the growing demand, with labor shortages at meat plants and severe winter storms that killed thousands of birds constricting chicken supplies. 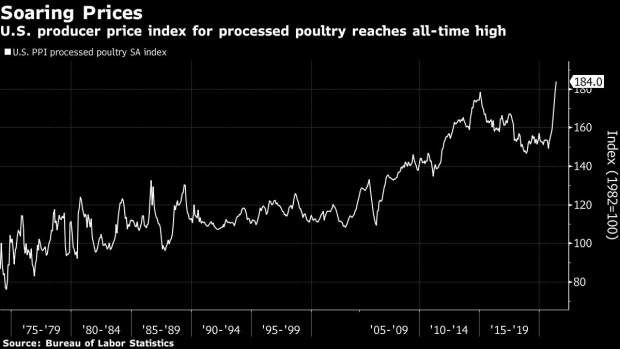 McDonald’s Corp., KFC and Burger King have all recently introduced new chicken sandwiches. At U.S. restaurants, orders for chicken entrees were up four per cent for the year ending in April 2021, according to market researcher NPD Group. Beef orders were down 14 per cent and pork was down 18 per cent.

While chicken prices are at all-time highs, prices for beef are still below the peaks set during the 2020 COVID-19 outbreak that shuttered American meat plants, and pork values are below records from 2014 that came during a swine-disease outbreak.

Supplies of meat including chicken could stay relatively tight, with surging costs for animal feed and for building materials such as lumber and steel discouraging expansion at poultry farms.

“With these really high prices, particularly for breasts and wings, that would induce us to produce more,” said David Anderson, a livestock economist at Texas A&M University. But the elevated feed and building costs are “straining our economic ability to grow.”