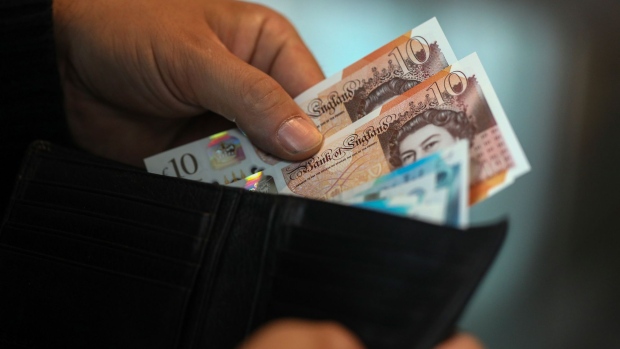 A man removes five and ten pound sterling banknotes from a wallet in this arranged photograph in London, U.K., on Tuesday, Sept. 19, 2017. Strategists are revising their estimates for the currency after its best week since 2009 saw it gain almost 3 percent as the Bank of England signaled it would look to withdraw stimulus “over the coming months.” , Bloomberg

(Bloomberg) -- Some tourists are finding the pound already buys less than a dollar, even though the British currency has yet to fall to parity with the greenback in foreign exchange markets.

The ChangeGroup office in Leicester Square, a popular London tourist destination, was selling $100 for £104 at 1 p.m. on Monday, including commissions. A representative for The Change Group International Plc didn’t immediately return a call seeking comment.

Of course, currency exchange bureaus in airports and neighborhoods popular with travelers typically charge worse rates, and include higher fees, than those set by financial institutions trading among themselves.

Still, the pound’s plunge from above $1.38 last October is making travel to Britain more affordable for US tourists -- while driving up the cost of holidays abroad for Britons.

The pound tumbled to a record low of $1.035 early in the day as investors sold off the currency and gilts on concern the UK government’s economic growth plan, unveiled Friday, will stoke inflation and push borrowing to unsustainable levels.

Sterling later reversed those losses on speculation the Bank of England will make a statement on market conditions.