The pound rallied for a fourth day as traders speculated the UK government will water down fiscal policies that pummeled the currency to a record low at the start of the week.

Sterling soared over 1 per cent on Friday to US$1.1234, surpassing levels seen before the Chancellor of the Exchequer Kwasi Kwarteng announced plans for debt-fueled tax cuts in Parliament a week ago. The currency was also supported by a slide in government bond yields following intervention by the Bank of England to stem the turmoil.

The moves cap an extremely volatile week for UK markets. Investors are looking at reports that the government is coming under political pressure from its own party to water down proposals or cut spending, as voter polls show support ebbing. Prime Minister Liz Truss is set to hold talks with the government’s fiscal watchdog on Friday.

“The pound is benefiting from abating UK sovereign credit risks after the decisive BOE intervention in the gilt markets and, more importantly, growing market hopes that the Truss government would reassess its fiscal stimulus plans,” said Valentin Marinov, head of currency strategy at Credit Agricole SA. 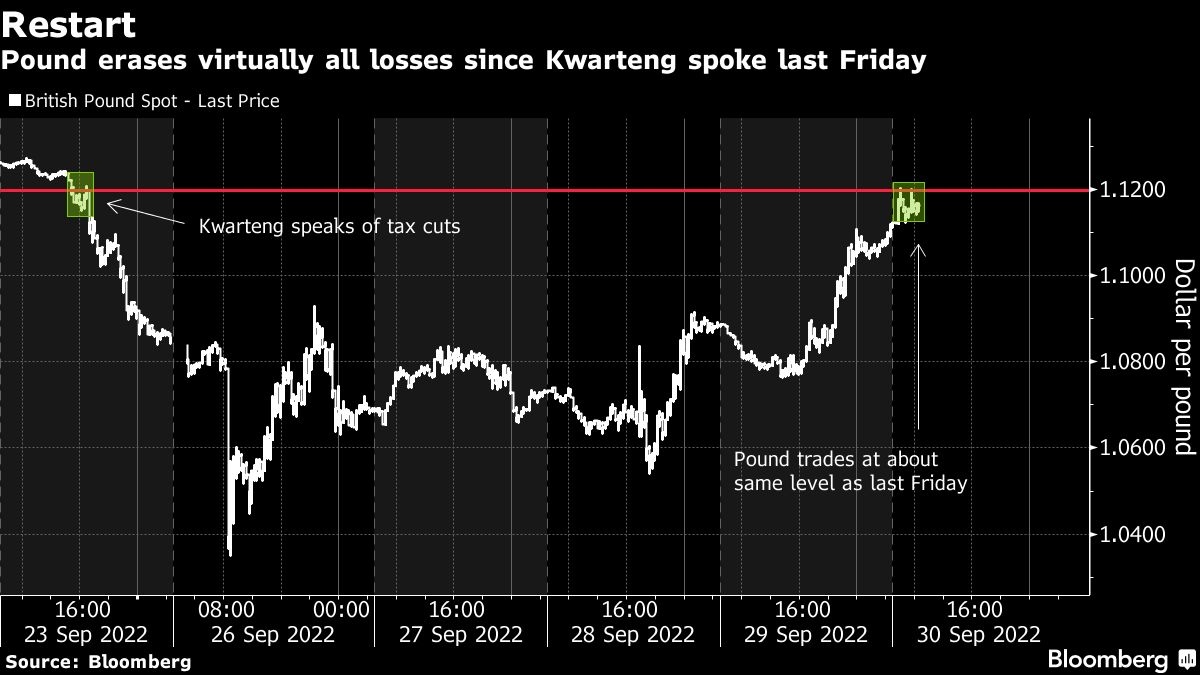 The expectations for policy changes have led money markets to trim wagers on aggressive BOE interest-rate hikes. Traders are pricing in about 135 basis points of hikes by the central bank’s next meeting in November, down from as much as 200 basis points on Monday.

That helped drive a rally in UK short-maturity bonds, among the most sensitive to changes in monetary policy, with two-year yields falling 30 basis points to 4.10 per cent. The market has stabilized since the BOE announced it would buy billions in bonds each day from Wednesday.

Still, so far Truss has showed no sign in public of backing down on her economic policy, calling it “the right plan” on Thursday. That leaves the mood nervous, with gauges of volatility having soared, as traders wait for headlines after the Office for Budget Responsibility meeting.

“While the involvement of the OBR will be welcomed by the markets, the government still has to find a way to balance the books and avoid a very negative assessment from the rating agencies,” said Chris Turner, a currency strategist at ING Groep NV.

“As the market assesses that immediate tail risk of a collapse is averted, position squaring has helped the currency,” said Mohit Kumar, a strategist at Jefferies, in a note to clients. He nevertheless remains negative on the currency, and recommends using “further strengths” to sell the currency. 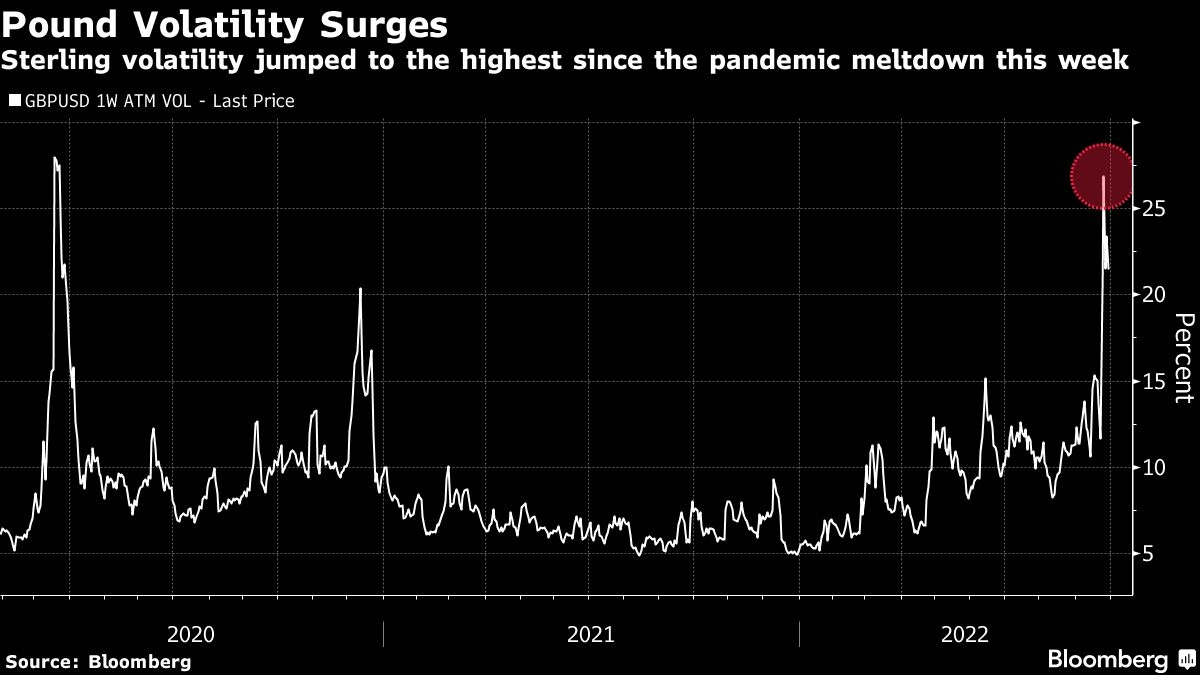 The Prime Minister is under pressure to slash spending on the same scale as George Osborne’s austerity drive of 2010 to stabilize UK public finances and restore investor confidence. Groups of Tory lawmakers have spent two days in frantic discussions following the BOE intervention. Some have privately called on Kwarteng to quit less than a month into the job to give Truss political cover to change plans for unfunded tax cuts that have roiled investors.

“Truss may not necessarily be kicked out -- just forced with Kwarteng to make a complete U-turn on last week’s tax cut plans,” said Ray Attrill, strategist at National Australia Bank Ltd. in Sydney.

Despite the currency’s recovery this week, many in the market remain bearish.

Nomura Holdings Inc. projects sterling will fall to 98 cents by year-end, while Morgan Stanley and TD Securities both see it sliding to parity over the same period, according to analyst forecasts compiled by Bloomberg. The probability that it will fall to parity this year is currently about 23 per cent, option-market pricing shows.

“The pound is not out of the woods yet,” said David Forrester, a strategist at Credit Agricole CIB in Hong Kong. “While the BOE has restored some credibility to the currency, the government’s finances are another part that needs to be fixed for the pound’s rally to last.”